Square (SQ - Free Report) is set to report its quarterly financial results after the closing bell on Wednesday, November 6. The fintech firm has struggled over the last year. Now the question is will earnings be the positive catalyst that Square stock needs?

Despite the broader market comeback, with the S&P 500 now up over 21% in 2019 and 8% in the past three months, Square stock has failed to regain any real momentum. In fact, SQ stock has tumbled 22% since the company released its Q2 earnings results on August 1, as investors voiced profitably concerns. 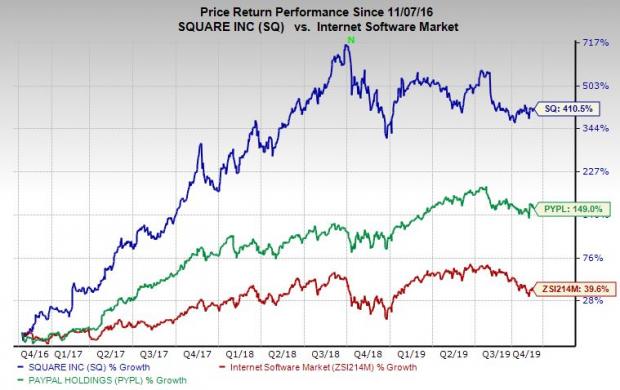 As we touched on already and as investors can see in the chart above, the last 12 months have been rough for SQ stock. Square shares are down 17% in the last 52 weeks, which includes some significant volatility. Square stock closed regular trading Monday at $62.38 per share, down 25% from its 52-week highs of $83.20 per share.

Despite the downturn, Square stock has soared 410% in the last three years to crush PYPL’s 150%, its industry’s 40% average, and backend payment giant Fiserv’s (FISV - Free Report) 115%. Therefore, SQ stock would appear to have plenty of room to climb and it sits even further below its September 2018 highs of roughly $99 per share.

Square is still trading at a pretty high forward earnings multiple. But Square only went public in late 2015 and its growth has left few concerned about its valuation. With that said, SQ is currently trading at 4.9X forward 12-month Zacks sales estimates. This marks a discount against its industry’s 5.7X average, as well as its own three-year median of 5.6X and 10.2X high.

Peeking further down the road, Square’s full-year fiscal 2020 sales are projected to climb 26% above our current year estimate to reach $5.63 billion. These estimates both represent slowdowns against 2018’s 49% expansion. However, the fintech firm’s 2017 sales climbed only 30% and the company is expected to add over  $1.1 billion in sales between 2019 and 2020.

Despite these beats, SQ stock fell after its last two quarterly earnings releases. In the end, Square stock still looks like it has plenty of room to grow as part of the larger fintech revolution. SQ is also a Zacks Rank #1 (Strong Buy) stock right now that sports an “A” grade for Growth in our Style Scores system and rests well below its 52-week highs.

Nevertheless, interested investors might want to think about waiting to see how Wall Street reacts to Square’s results and guidance after the closing bell on Wednesday. If Square is able to impress, SQ stock could possibly be headed for a rally.