In the past week, SkyWest (SKYW - Free Report) and the Latin American carrier Gol Linhas Aereas Inteligentes (GOL - Free Report) reported better-than-expected third-quarter 2019 earnings per share. However, the picture pertaining to revenues was in contrast for both carriers.

SkyWest’s revenues beat the Zacks Consensus Estimate but declined year over year due to the sale of ExpressJet Airlines in January 2019. Meanwhile, Gol Linhas’ top line missed the consensus mark but improved year over year owing to solid demand in the corporate segment and capacity discipline.

Meanwhile, profit after tax at the European low-cost carrier Ryanair Holdings (RYAAY - Free Report) was flat year over year at €1.15 billion in the first half of fiscal 2020 (ended Sep 30, 2019) with average air fares declining 5%. However, an 11% rise in traffic led to 11% growth in revenues during the first six months of fiscal 2020. Moreover, load factor was 96%. Over this period, the carrier returned €250 million to its shareholders through buybacks.

2. Gol Linhas’ third-quarter 2019 earnings (excluding 65 cents from non-recurring items) of 34 cents per share surpassed the Zacks Consensus Estimate of 32 cents in the third quarter. However, the company reported a loss in the year-ago period. This marks the company’s 13th straight quarter of positive operating results. But, results were partly affected by 4% depreciation of the Brazilian real against the US dollar. Meanwhile, net revenues of $936 million missed the Zacks Consensus Estimate of $938.4 million. However, passenger revenues accounting for bulk (94.4%) of the top line improved 29.5% on a year-over-year basis. (Read more: Gol Linhas Q3 Earnings Top on Solid Passenger Revenues).

3. Ryanair’s second-quarter fiscal 2020 earnings (excluding 18 cents from non-recurring items) of $4.51 per share beat the Zacks Consensus Estimate by 51 cents. Moreover, earnings per share and revenues improved 2% and 6.7%, respectively, on a year-over-year basis.

The carrier expects fiscal 2020 traffic to increase 8% to 153 million. Fuel bill and ex-fuel unit costs for the period are anticipated to rise €450m and 2%, respectively. The carrier expects fiscal 2020 profit after tax in the €800-€900 million range. Ryan air, however, is cautious about any market uncertainty like a ‘no deal Brexit’. Even though the company has limited visibility in the fare environment for second-half fiscal 2020, the same is likely to be slightly better than what was witnessed last winter. Moreover, management stated that the delivery of its first B737-MAX-200 aircraft has been delayed yet again and now it expects the jet delivery in March/April 2020.

Meanwhile, Ryanair’s October traffic report was excellent with the metric (including 0.6 million from its LaudaMotion unit) increasing 5% year over year to 13.5 million. However, the load factor was unaltered at 96%.

4. At Delta, consolidated traffic, measured in revenue passenger miles (RPMs) came in at 19.76 billion, up 5.2% year over year owing to 6.2% increase on the domestic front. Consolidated capacity (measured in available seat miles/ASMs) expanded 5.1% to 23.09 billion as well on a year-over-year basis. Additionally, Delta’s passenger count rose 5.8% to 17.51 million in October.Meanwhile, on-time performance (mainline) was 86.6% in the month compared with 90% a year ago.

5 International Consolidated Airlines Group (ICAGY - Free Report) , the parent company of British Airways and Iberia, announced that it intends to acquire the Spanish airline Air Europa. Air Europa is currently owned by Globalia. Per the deal worth $1.12 billion (€1 billion), Iberia will be purchasing the entire airline-related segments only from Globalia. The transaction is expected to be completed in the second half of 2020, subject to government clearance. 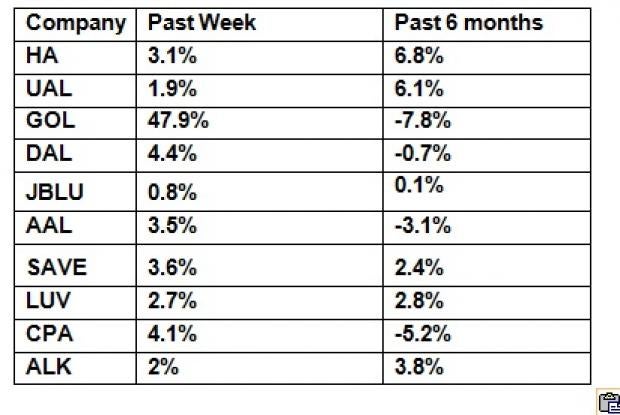 The table above shows that all airline stocks traded in the green over the past week, resulting in the NYSE ARCA Airline Index gaining 3.2% to $110.9. Over the course of six months, the index appreciated almost 4.7%.