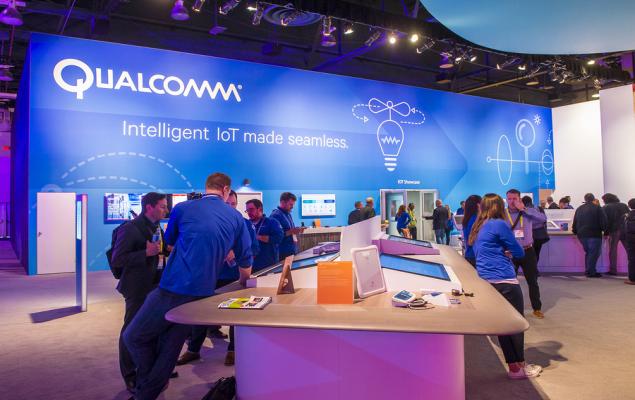 Quarterly non-GAAP net income came in at $947 million or 78 cents per share compared with $1,260 million or 89 cents per share in the year-ago quarter. The figure exceeded the top end of management’s guidance due to higher Qualcomm Technology Licensing (QTL) revenues. The bottom line beat the Zacks Consensus Estimate by 7 cents.

On a GAAP basis, total revenues for the fiscal fourth quarter were $4,814 million compared with $5,778 million in the prior-year quarter. The figure surpassed the consensus estimate of $4,718 million and was above the midpoint of the earlier guided range due to solid QTL revenues on higher unit sale and strong product mix.

Quarterly revenues from Qualcomm CDMA Technologies (QCT) declined 22% year over year to $3,611 million, due to weakening demand for 4G solutions. Mobile Station Modem (MSM) chip shipments were 152 million, down from 232 million. EBT margin decreased to 14% from 17% in the prior-year quarter.

QTL revenues were $1,158 million, down 4% year over year. The figure came in slightly above the midpoint of management’s guided range driven by higher unit sale and strong product mix. EBT margin was 68% compared with 64% in the year-ago quarter, and exceeded the high end of the company’s guidance on lower operating expenses due to faster-than-anticipated reduction in excess litigation expenses.

During the reported quarter, Qualcomm paid out cash dividends totaling $711 million or 62 cents per share. At quarter-end, the company had $7.1 billion available for repurchase under its $30 billion stock buyback program.

For the first quarter of fiscal 2020, Qualcomm currently expects revenues of $4.4-$5.2 billion. Non-GAAP earnings are projected in the 80-90 cents per share range. Revenues at QTL are expected between $1.3 billion and $1.5 billion. For QCT, the company anticipates MSM shipments in the range of 145 million to 165 million units.

Verizon has long-term earnings growth expectation of 4.2%. It delivered an average positive earnings surprise of 2.2% in the trailing four quarters, beating estimates on each occasion.