Kinross Gold Corporation (KGC - Free Report) delivered net earnings of $60.9 million or 5 cents per share in third-quarter 2019 against loss of $104.4 million or 8 cents in the year-ago quarter.

Margin per gold equivalent ounce sold was $732 in the third quarter, up 69.4% year over year.

Adjusted operating cash flow jumped 100.7% year over year in the third quarter to $295.4 million, supported by higher margins. Cash and cash equivalents were $358 million, down 23.8% year over year.

Long-term debt amounted to $1,836.8 million at the end of the third quarter. Notably, the company has no scheduled debt maturities due until September 2021.

Capital expenditure declined 3.9% year over year to $265.5 million in the third quarter.

Shares of Kinross have rallied 80.9% in the past year compared with the industry’s 55.3% growth. 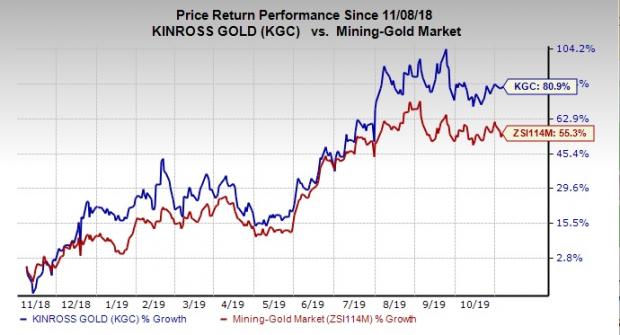 Zacks Rank & Others Stocks to Consider

Impala Platinum has an expected earnings growth rate of 237.9% for the current fiscal year. The company’s shares have surged 280% in the past year.

Agnico Eagle has an estimated earnings growth rate of 168.6% for the current year. Its shares have moved up 67.6% in the past year.