We believe that Berry Global’s latest decision to redeem notes will enable it to lower its debt burden.

Notably, the company’s balance sheet is highly leveraged. It had long-term debt of approximately $5,468 million at the end of third-quarter fiscal 2019 (ended Jun 29, 2019). Also, net interest expenses in the quarter were $71 million, up about 6% year over year. If unchecked, high-debt levels can increase the company's financial obligations and prove detrimental to its profitability.

Escalating cost of sales has been a major cause of concern for Berry Global. In the last five fiscal years (2014-2018), the company's cost of goods sold increased roughly 9% (CAGR). Increased expenses (on account of higher raw material, transportation and manufacturing costs) have been escalating its aggregate costs, of late. We believe that further rise in costs might prove detrimental to Berry Global's margins in the quarters ahead.

Moreover, the company is exposed to geopolitical risks and headwinds arising from unfavorable movements in foreign currencies. For instance, in the second and the third quarter of fiscal 2019, forex woes had an adverse impact of 1.1% and 0.8% on sales growth, respectively.

In the past three months, this Zacks Rank #4 (Sell) stock has declined 1.6% against the industry’s growth of 0.2%. 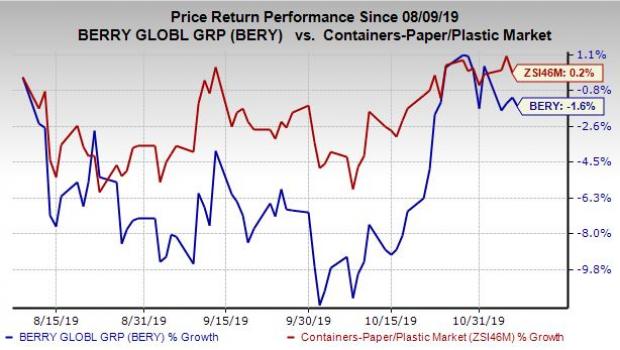 Brady pulled off average positive earnings surprise of 9.68% in the trailing four quarters.