Adjusted earnings per share of 56 cents outpaced the consensus mark by 8% and increased 17% year over year. The increase was driven by higher operating profit of 7 cents and a lower effective tax rate of 2 cents, partially offset by negative impact of a penny related to lower foreign exchange balance sheet remeasurement gains and higher net interest expense.

Revenues amounted to $889 million, which beat the consensus estimate by 2% and improved 19% year over year on a reported basis as well as constant-currency basis. The top line was driven by large deals and growth in transformation services.

The stock has gained 48.4% year to date, significantly outperforming the 26.8% rally of the industry it belongs to. 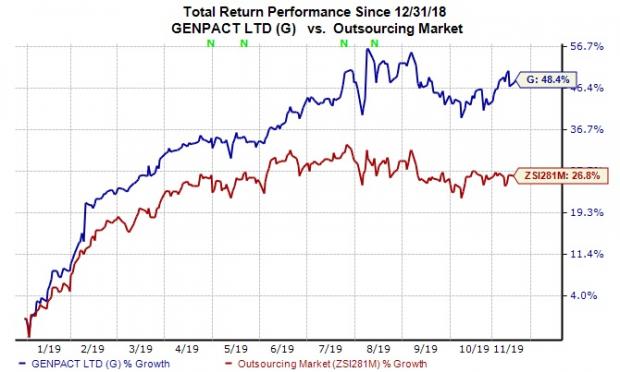 Let’s check the numbers in detail.

Adjusted income from operations totaled $142 million, up 15% year over year. Adjusted operating income margin decreased to 16% from 16.6% in the year-ago quarter.

Selling, general & administrative (SG&A) expenses amounted to $195 million, up 16% year over year. As a percentage of revenues, SG&A expenses were 21.9% compared with 22.5% in the prior-year quarter.

The company generated $220 million of cash from operating activities in the quarter. Capital expenditures were $25 million.

Genpact returned around $16 million to shareholders through dividend payout and $24 million through share repurchase in the quarter.

The company continues to expect revenues in the range of $3.46-$3.5 billion, the midpoint ($3.48 million) of which is below the current Zacks Consensus Estimate of $3.49 billion.

Adjusted operating income margin is continued to be anticipated around 16%.