In the past five trading days, telecom stocks went downhill as optimism about the “Phase One” deal between the United States and China withered on disagreement on various contentious issues. The partial trade accord is anticipated to ease the bilateral tensions created by the prolonged trade war. However, reported demand by the communist nation to roll back the existing U.S. tariffs raised speculations about a probable signing of an agreement between President Trump and his Chinese counterpart. In addition, various roadblocks related to forced technology transfer and IP protection along with lack of clarity on the quantum of U.S. farm products purchase on a monthly or yearly basis clouded the negotiation process. To add to the woes, lower-than-expected quarterly earnings and relatively soft outlook from bulk of the sector firms weighed on the beleaguered sector.

Although both the United States and China had agreed in principle on the partial trade accord, various disagreements arose as high-level officials from both sides deliberated to finetune the nitty-gritties of the deal. President Trump upped the ante by discarding speculations about a likely rollback of the existing U.S. tariffs to seal the deal. However, industry observers widely believe that tariffs scheduled on Dec 15 on consumer items such as smartphones and toys are not likely to come into effect as part of the initial deal.

The United States is also reportedly seeking definite commitment from China for IP protections and prohibition of the practice of forced technology transfer in exchange for rolling back some of the tariffs. Moreover, according to persons familiar with the proceedings, China’s officials have been asked to spell out the quantum of quarterly and monthly purchase of agricultural products per their promise to buy $50 billion worth of U.S. farm goods. However, China is apparently reluctant to commit a specific amount in the text of the potential deal.

Although the sudden irritants are not expected to derail the trade negotiations, both the countries have been unable to reach a consensus regarding the various sticking points. While both sides remain intent to reach an agreement at the earliest on domestic compulsions, it appears that the trade war has been rather a ‘two-steps forward, three-steps backward’ affair. This, in turn, has largely dragged the sector down.

Quarterly non-GAAP net income came in at $947 million or 78 cents per share compared with $1,260 million or 89 cents per share in the year-ago quarter. The bottom line beat the Zacks Consensus Estimate by 7 cents. On a GAAP basis, total revenues for the fiscal fourth quarter were $4,814 million compared with $5,778 million in the prior-year quarter. The figure surpassed the consensus estimate of $4,718 million and was above the midpoint of the earlier guided range. (Read more: Qualcomm Q4 Earnings & Revenues Top, Decline Y/Y)

Adjusted net income came in at $328 million or 31 cents per share compared with $327 million or 30 cents in the prior-year quarter. The bottom line, however, missed the Zacks Consensus Estimate by a penny. Quarterly consolidated operating revenues declined 3.6% year over year to $5,606 million primarily due to lower revenues at the Consumer segment. The top line surpassed the consensus estimate of $5,551 million. (Read more: CenturyLink Q3 Earnings Miss, Revenues Beat Estimates)

Non-GAAP net income came in at $98.7 million or $1.44 per share compared with $86.2 million or $1.17 per share in the year-ago quarter. The bottom line beat the Zacks Consensus Estimate by 16 cents. Quarterly revenues increased 14.3% year over year to $323.3 million backed by higher sales of service provider technology and enterprise technology products. The top line surpassed the consensus estimate of $299 million. (Read more: Ubiquiti Q1 Earnings Top Estimates on Record Revenues)

Net income for the September quarter was $17.9 million or 8 cents per share compared with $22.1 million or 9 cents per share a year ago. The year-over-year decline was primarily due to higher operating costs and lower revenues. The bottom line missed the Zacks Consensus Estimate by 10 cents. Quarterly revenues were $638.6 million, down 0.4% from $641.1 million year over year. The top line lagged the consensus estimate of $647 million. (Read more: Zayo Q1 Earnings & Revenues Miss Estimates, Fall Y/Y) 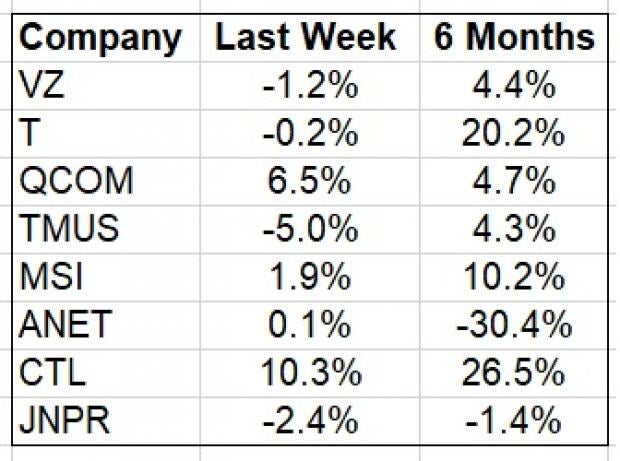 Over the past six months, the Zacks Telecommunications Services industry has recorded average growth of 6.5% while the S&P 500 has rallied 8.1%. 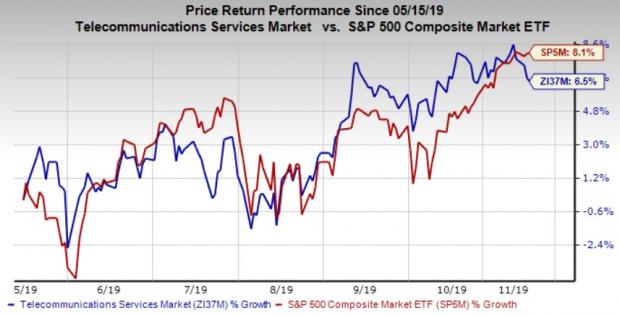 In addition to product launches, strategic deals and 5G deployments, all eyes will remain glued to how the government handles the various issues related to the thorny issues of the “Phase One” deal.

Rockwell Automation to Gain on Products and Acquisitions