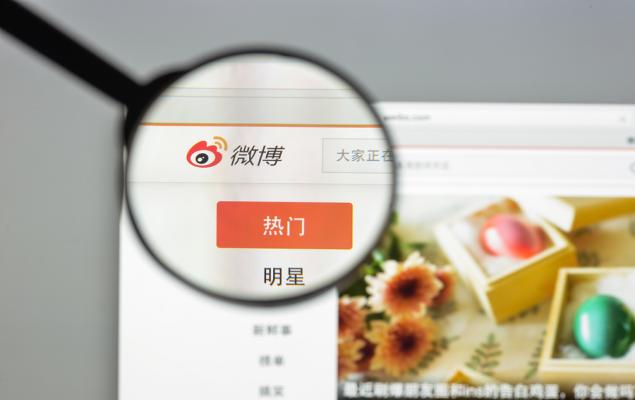 Weibo Corporation (WB - Free Report) reported third-quarter 2019 adjusted earnings of 77 cents per share, which beat the Zacks Consensus Estimate by 2.7% and grew at the same rate year over year.

Revenues of $467.8 million beat the Zacks Consensus Estimate by 0.1% and increased 1.6% year over year. At constant currency (cc), the top line improved 6%.

Notably, Advertising and Marketing revenues from small and medium enterprises (SMEs) and Key Accounts (KAs) were $393.3 million, up 3%.

Value Added Services (VAS) revenues (11.8% of total revenues) increased 8.6% year over year to $55.3 million on revenues earned from the live streaming business acquired in the last quarter of 2018.

Weibo improved its trend and topic products which enabled users to discover trends and hot topics more efficiently and participate in discussions. This has been instrumental in expanding the user base and enhancing user engagement.

Average Daily Active Users (DAUs) were 216 million in the quarter under review. The company added nearly 21 million DAUs from the year-ago quarter.

Additionally, Weibo’s collaborations with handset manufacturers to include content on the handset interface have helped it lower user acquisition costs.

Weibo expects revenue growth in the range of 0-3% year over year for the fourth quarter, on a constant-currency basis. The conservative growth outlook reflects macroeconomic headwinds and stiff market competition in the near term.

While long-term earnings growth rate for Alteryx is pegged at 39.9%, both Cirrus Logic and Marchex’s earnings are expected to grow 15%.