Here's Why Investors Should Steer Clear of Genesee & Wyoming

Dismal performance of the Australian (which is 51% owned by the company) and U.K./European units is an added headwind. Revenues from these units declined 34.6% in the first nine months of 2019. Moreover, Genesee & Wyoming has a significant exposure to UK/Europe. In the first nine months of 2019, the company’s U.K./European operations accounted for approximately 27.3% of its total revenues. This significant exposure might be a cause for concern due to complications that are likely to arise once the UK leaves the EU. Additionally, high capital expenses are weighing on the bottom line.

Following the above-mentioned headwinds Genesee & Wyoming has underperformed its industry in the past three months. The stock has gained merely 0.9% compared with its industry’s 5.4% growth. 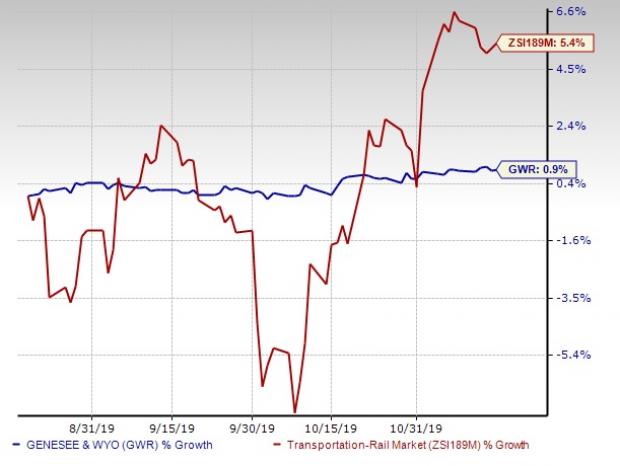 Due to the weak freight-related scenario, freight revenues that accounted for bulk (70.3%) of the top line in the September quarter dipped 3.1% to $410.15 million. Freight-related revenues contributing 24.2% to the top line slid 2.8% to $141.37 million. The balance came from ‘other revenues’.

At the North American unit, adjusted operating ratio (operating expenses as a percentage of revenues) deteriorated to 72.9% from 71.9% in third-quarter 2018. Notably, lower the value of the metric the better. Moreover, at its Australian operations, the same deteriorated to 72.8% from 73% a year ago. At the U.K./European operations, operating ratio worsened to 101.5% from 97.3% in the prior-year quarter. On a consolidated basis, the metric (reported) stood at 80.7% compared with 78.8% a year ago.

Downward estimate revisions highlight the pessimism surrounding the stock. In fact, the Zacks Consensus Estimate for 2019 earnings has been revised 0.9% downward over the past 60 days.

Given this bleak backdrop, the company’s Zacks Rank #4 (Sell) is well justified and hence we believe investors should discard this stock from their portfolios at the moment.

Shares of Kansas City Southern, Allegiant Travel and Controladora Vuela have rallied more than 60%, 69% and 100%, respectively, so far this year.

Here's Why You Should Hold on to PerkinElmer Stock for Now