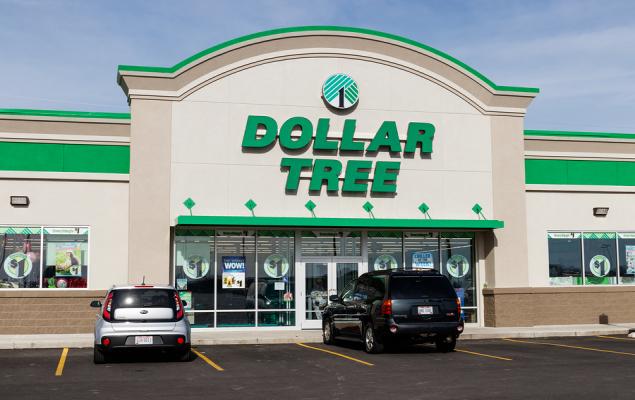 Things You Must Know Before Dollar Tree's (DLTR) Q3 Earnings

Dollar Tree, Inc. DLTR is slated to release third-quarter fiscal 2019 results on Nov 26, before the market opens. In the last reported quarter, the company delivered a positive earnings surprise of 8.6%. Moreover, its bottom line beat estimates by 2.7%, on average, over the trailing four quarters.

The Zacks Consensus Estimate for the company’s fiscal third-quarter earnings is pegged at $1.11 per share, indicating a 5.9% decline from the figure reported in the year-ago quarter. However, the consensus mark has been unchanged in the past 30 days. For revenues, the consensus estimate stands at $5,737 million, implying 3.6% growth from the prior-year quarter’s reported number.

Dollar Tree boasts a robust same-store sales (comps) trend that reflects strength in Dollar Tree and Family Dollar banners as well as increases in traffic and average ticket. A competitive pricing and store expansion plans, including remodeling and relocations, have also been aiding the company’s comp performance.

In the last earnings call, management had predicted enterprise comps to increase in low-single digits for the fiscal third quarter.

Additionally, its efforts to provide a hassle-free shopping experience to customers are aiding performance. Initiatives like the Dollar Tree Plus! test and store-optimization efforts are likely to have boosted margins and profitability in the quarter under review. Moreover, restructuring and expansion initiatives, as evident from steady store openings and improvement of distribution centers, are its key revenue drivers.

However, Dollar Tree has been grappling with a soft margins trend due to higher costs. Increased freight costs in both segments as well as higher markdowns and shrink in the Family Dollar segment have been weighing on its gross margin. Additionally, higher SG&A costs — resulting from rise in operating and corporate expenses for the consolidation of store support centers, asset written off for closed stores, payroll costs due to higher average hourly rates, and store-level initiatives — have been impacting its operating margin.

The company had earlier anticipated continued pressure on store payroll, thanks to competitive markets, states increasing minimum wages and completion of its ongoing initiatives, to weigh on margins throughout fiscal 2019. However, it anticipates domestic freight costs, as a percentage of sales, to flatten out in the second half of the fiscal year. Nonetheless, the company expects import freight rates to witness a continued increase in the second half, putting pressure on its margins.

Our proven model does not conclusively predict an earnings beat for Dollar Tree this time around. The combination of a positive Earnings ESP and a Zacks Rank #1 (Strong Buy), 2 (Buy) or 3 (Hold) increases the odds of an earnings beat. But that’s not the case here. You can uncover the best stocks to buy or sell before they’re reported with our Earnings ESP Filter.

Here are some companies that you may want to consider as our model shows that these have the right combination of elements to post an earnings beat:

Ross Stores, Inc ROST presently has an Earnings ESP of +2.39% and a Zacks Rank #2. You can see the complete list of today’s Zacks #1 Rank stocks here.

Dollar General Corporation DG currently has an Earnings ESP of +2.34% and a Zacks Rank #2.