Endo International plc ENDP announced that the FDA has accepted for review the original Biologics License Application (BLA) for collagenase clostridium histolyticum (CCH) for the treatment of cellulite in the buttocks.

The BLA is supported by the results of the phase III studies — RELEASE-1 and RELEASE-2.

RELEASE-1 and RELEASE-2 were two identical, multicenter, randomized, double-blind, placebo-controlled studies that enrolled 845 women (423 and 422 in each separate trial) aged 18 years or above in the United States with moderate-to-severe cellulite. Each subject received up to three treatments of CCH (0.84 mg/treatment area) or placebo with an interval of around 21 days between each session.

The results of the studies showed that CCH delivered a clinically meaningful and statistically significant improvement as compared to placebo for all primary and secondary endpoints.

A potential approval of CCH should boost Endo’s top line, given the wide market potential.

Earlier this month, Endo reported better-than-expected results for the third quarter, wherein it beat on both earnings and sales on the back of Xiaflex. Xiaflex’s performance has been solid in the year so far on higher demand in both Peyronie's disease and Dupuytren's contracture. The Sterile Injectables segment has also boosted the top line, owing to continued strong growth in Vasostrict, Adrenalin and Aplisol.

Shares of Endo have lost 39.1% in the year so far against the industry’s 7.8% growth. It has been embroiled in various opioid litigations lately, which affected the share price. 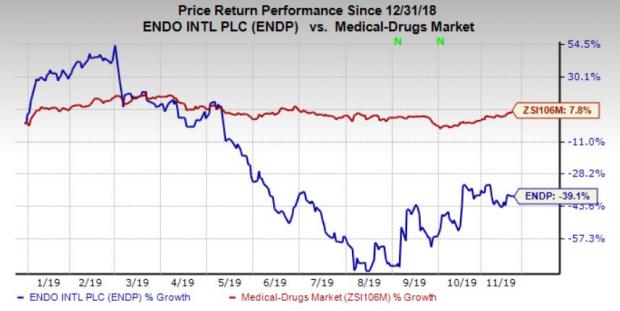 Apart from Endo, many pharma companies like Mallinckrodt and Teva Pharma TEVA are embroiled in multiple opioid litigations filed by several states, counties and political subdivisions in the United States regarding the abuse of opioid-based drugs. The industry players are accused of faulty marketing practices, which downplayed addiction risks from these drugs and spurred their consumption instead.

Endo currently carries a Zacks Rank #3 (Hold). A better-ranked stock in this space is Jazz Pharmaceuticals JAZZ, which sports a Zacks Rank #1 (Strong Buy). You can see the complete list of today’s Zacks #1 Rank stocks here.