Work related to the deal will be performed in Newport News, VA, and is expected to be completed by November 2020. The contract has been awarded by the Supervisor of Shipbuilding, Conversion and Repair, USN, Newport News.

Earlier during the year, the U.S. fiscal 2020 defense budget approved $34.7 billion for shipbuilding investments, which surged 85% from the previous spending provision. With Huntington Ingalls being an expert in manufacturing amphibious assault and expeditionary ships, such budgetary developments are expected to have been ushering in notable shipbuilding contracts for the company. The latest contract seems to be a bright example of the same.

Huntington Ingalls, through its Newport News unit, operates as the nation's sole designer, builder and refueler of nuclear-powered aircraft carriers. Notably, more than 70% of the active Navy fleet comprises Huntington Ingalls ships. The company's Ingalls Shipbuilding segment is the sole manufacturer of amphibious assault ships for the Navy.

Moreover, the company is currently the only builder of National Security Cutters (NSCs) for the U.S. Coast Guard and one of the two companies that expertise in building the DDG-51 Arleigh Burke-class destroyers. Evidently, Huntington Ingalls is well-positioned to acquire regular shipbuilding-related orders from the Pentagon.

Interestingly, over the last few quarters, the Newport News unit has witnessed considerable revenue rise. In the third quarter of 2019, revenues for this unit amounted to $1.3 billion, reflecting an increase of 7.2% from the same period last year. This was primarily led by higher volumes in submarine constructions.

To this end, it is imperative to mention that, lately, the company has made notable progress in its submarine programs, which should further boost growth for the Newport News unit. Notably, Huntington Ingalls delivered SSN 791 in late October, in line with its planned delivery in the third quarter of 2019. Moreover, SSN-794 Montana, the first Block IV delivery, is on track to achieve pressure hull completion in December, with delivery planned for the first half of 2021. On successful completion, we expect such notable programs to boost the company’s top line.

In a year’s time, shares of Huntington Ingalls have rallied 22.8%, outperforming the industry’s 9.9% growth. 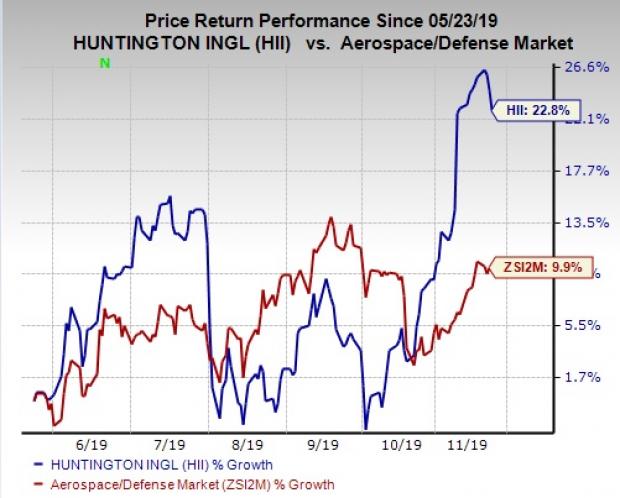 Northrop Grumman delivered average positive earnings surprise of 11.48% in the last four quarters. The Zacks Consensus Estimate for 2019 earnings has risen 3.8% to $20.38 in the past 90 days.

L3Harris Technologies came up with average positive earnings surprise of 5.02% in the last four quarters. The Zacks Consensus Estimate for 2019 earnings has risen 7.5% to $9.99 in the past 90 days.

Leidos Holdings has delivered average positive earnings surprise of 8.93% in the last four quarters. The Zacks Consensus Estimate for 2019 earnings has increased 5.1% to $4.96 in the past 60 days.