AECOM to Gain From Solid Backlog and Restructuring Efforts

AECOM (ACM - Free Report) is poised to benefit from strong backlog, encouraging infrastructure spending by the federal government and cost-reduction efforts. Also, solid prospects across the business and strong brand presence are aiding the company.

Notably, shares of AECOM have surged 61% so far this year compared with the industry’s 25.3% rally. The price performance was backed by a solid earnings surprise history. The company’s earnings surpassed the Zacks Consensus Estimate in eight of the trailing nine quarters. 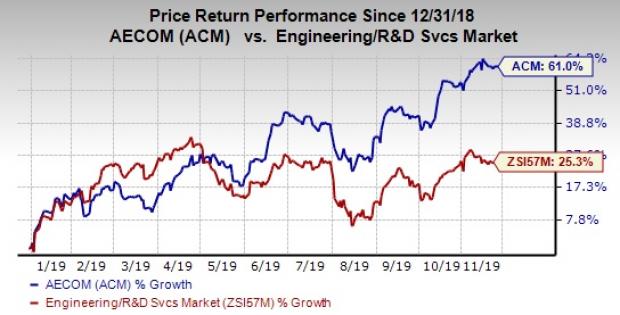 Let’s delve into the factors that substantiate the company’s Zacks Rank #2 (Buy). You can see the complete list of today’s Zacks #1 Rank (Strong Buy) stocks here.

AECOM’s business has solid prospects given solid backlog level. The company reported record backlog of $59.7 billion at the end of third-quarter fiscal 2019, up 11% from the prior-year quarter. Also, new order wins were $27.5 billion in the period. The company’s solid backlog level, a key indicator of revenue growth, indicates significant opportunities.

AECOM’s diversified portfolio, which comprises designing and construction services, is spread across a number of key markets. More than 70% of its profits are generated from infrastructure and defense markets, which are poised to benefit from the favorable political climate in the United States and internationally.

Favorable infrastructure spending in the United States, Australia, New Zealand and Hong Kong are driving growth for the company. The majority of the U.S. government’s $1.5-trillion infrastructural plan is focused on transit and water markets, where AECOM enjoys a dominant share. Furthermore, the U.K. government’s National Infrastructure and Construction Pipeline, which includes more than $600 billion of planned transformative investments, holds great promise.

In addition, the company’s transportation business in Australia is witnessing steady rise. It believes that the business will gather more steam from the Australia government's $50-billion critical infrastructure investment commitment through 2020.

The company’s Design and Consulting Services (“DCS”) unit — contributing 41% to total revenues — is currently pursuing a multi-billion-dollar pipeline that is expected to drive growth through fiscal 2020.

Moreover, AECOM continues to invest in markets that are more aligned with its strategic and financial priorities. It executed a $225-million restructuring plan in fiscal 2019 and announced additional restructuring actions in August. As a result, it continues to anticipate achieving an increase of more than 210 basis points (bps) in DCS margin by 2020 from the fiscal 2018 level. It already achieved 120-bps improvement for the same in fiscal 2019.

The company, which already completed nearly 50% of its country exit plan, intends to exit more than 30 countries to prioritize investments in markets with higher growth prospects and competitive advantages. Also, it has entered a joint venture with Canyon Partners for ACAP, which will support AECOM’s overhead costs. Additionally, its $1-billion share repurchase program is expected to result in strong fiscal 2020 performance and shareholder value creation.

Gates Industrial’s earnings surpassed estimates in two of the trailing four quarters, the average beat being 12.1%.