5 Consumer Stocks to Buy Despite Dip in Consumer Confidence

On Nov 26, the Conference Board reported U.S. consumer confidence data for the month, which dropped for four months in a row. However, looking carefully inside the report gives us some surprising positive facts. Despite the dip in consumer confidence, overall reading is fairly good to support a strong holiday sales season.

Notably, consumer spending constitutes around 70% of the U.S. GDP while business spending generates nearly 12%. Therefore, an overall good consumer confidence reading indicates that the U.S. economy, which is currently in its record 11th year of expansion, is likely to maintain the momentum.

Consumer Confidence Drops But Not Disappoints

Per the Conference Board, the index of consumer confidence for the month of November came in at 125.5, lagging the previous month’s revised reading of 126.1 (reported reading was 125.9) as well as the consensus estimate of 128.1. The index had a free fall in the last four months after it touched 135.8 in July.

The Present Situation Index, which gauges consumers’ views on current market conditions, declined from 173.5 to 166.9. This was mainly due to softening in consumers’ assessment of current business and employment conditions, a direct result of the lingering trade conflict with China.

Meanwhile, on Nov 22, the University of Michigan, which also conducts a similar study on U.S. consumer behavior, reported that consumer sentiment for November climbed to 96.8 from 95.5 in the previous month. November’s reading was the highest in four months.

Per the study, the index of consumer sentiment came in at 95 or higher in 30 of the past 35 months. This marked the greatest level of consumer optimism since the period between January 1998 and December 2000.

A Ray of Hope in Consumer Confidence Data

According to Conference Board report, the Expectations Index of November, which is a measure of consumers’ short-term (for the next six months) outlook for income, business and labor market conditions, increased to 97.9 from 94.5 in October. Notably, the University of Michigan report also revealed that the Expectations Index rose to 87.3 in November from 84.2 in October.

Similar findings of the two different studies clearly indicate that U.S. consumers are expecting a rebound of economic growth in the first quarter of 2020. Per Lynn Franco, director of economic indicators of Conference Board, “Overall, confidence levels are still high and should support solid spending during this holiday season.”

Meanwhile, U.S. retailers are gearing up for the holiday season, starting late November and stretching until early January.  According to the National Retail Federation (NRF), holiday retail sales — excluding restaurants, automobile dealers and gasoline stations — are projected to rise 3.8% to 4.2% year over year to a total of $727.9 billion to $730.7 billion.

At this stage, it will be prudent to invest in consumer-centric stocks with strong growth potential. However, the selection process may be difficult. This is where our VGM Score comes in handy.

We narrowed down our search to five such stocks, each carries either a Zacks Rank #1 (Strong Buy) or 2 (Buy) and VGM Score of A. You can see the complete list of today’s Zacks #1 Rank stocks here. 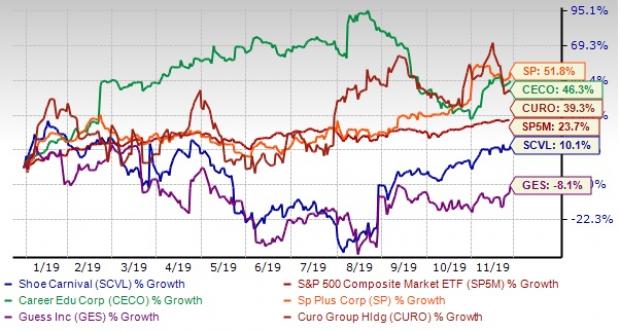 Career Education Corp. CECO operates colleges, institutions, and universities that provide education to student population in various career-oriented disciplines through online, campus based, and blended learning programs in the United States. It operates through three segments: Colorado Technical University, American InterContinental University and All Other Campuses.