It is a well-documented fact that the highly diversified Zacks Transportation sector is plagued with multiple headwinds like a dismal freight scenario in the United States, grounding of Boeing 737 MAX jets and driver shortage.

Despite the headwinds, sector participants fared well in the Q3 earnings season. The rosy picture is supported by our Earnings Outlook, which states the S&P 500 transportation stocks witnessed an impressive 8.2% year-over-year bottom-line growth. Moreover, 73.3% of the S&P 500 transportation companies outperformed with respect to the bottom line in the September quarter.

Let’s delve deep to unearth the reasons behind the impressive performance of transportation stocks in Q3 amid challenges:

Expenses on fuel comprise a substantial input cost for any transportation company. On this note, transportation companies were well served as oil prices fell 8.5% during the July-September period, mainly owing to the restoration of production capabilities of crude following the drone attack on Saudi Arabia’s oil facilities in mid-September.

Despite soft U.S. rail volumes due to economic sluggishness, the bottom-line performance of most railroads – another important corner of the Transportation sector – benefited in Q3 from cost-cut efforts following the adoption of precision scheduled railroading model. Additionally, results of car rental companies like Hertz Global Holdings HTZ gained from upbeat demand and favorable pricing.

What is more encouraging is that there are ample tailwinds to suggest that sector participants will continue to perform well in the tough environment. For instance, U.S. carriers like Delta Air Lines DAL are likely to attract significant traffic during the Thanksgiving travel period (Nov 22-Dec 3). As a result, passenger revenues should see a further uptick, thereby bolstering the performance of carriers in the December quarter.

With the U.S. economy expanding at a steady pace and consumers remaining confident about their well-being, a greater number of Americans are opting for a vacation. This is boosting travel demand as highlighted by the Airlines for America’s rosy Thanksgiving forecast.

Additionally, with railroads continuing their cost-control efforts, their bottom line should continue to grow despite a sluggish freight environment. Moreover, oil prices are unlikely to touch the astronomical highs of 2014 any time soon. In fact, the U.S. Energy Information Administration predicts average oil prices at 2019-end to be $56.45 per barrel, lower than the 2018 figure of $65.06 per barrel. This should support the bottom-line growth of transportation stocks.

In fact, the Zacks Transportation sector has outperformed the S&P 500 Index so far in Q4. The sector has gained 6.6% of its value on a quarter-to-date basis compared with the S&P 500’s appreciation of 5.3%. 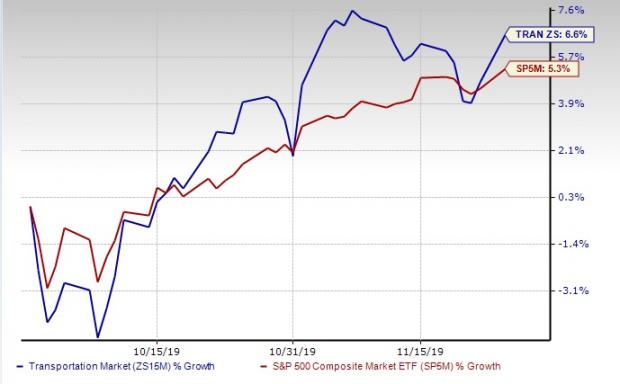 In view of the enthusiasm surrounding transportation stocks, as pin-pointed in the write up, we believe that stocks from the space should grace one’s portfolio. We have, thus, selected four transportation stocks that carry a Zacks Rank #1 (Strong Buy) or 2 (Buy). You can see the complete list of today’s Zacks #1 Rank stocks here.

Allegiant Travel Company (ALGT - Free Report) , based in Las Vegas, NV, operates a low-cost passenger airline through its subsidiary Allegiant Air LLC and sports a Zacks Rank #1. The stock has seen the Zacks Consensus Estimate for current-year earnings being revised 5.9% upward over the past 60 days. The stock’s expected earnings growth rate for the current year is 44.6%, higher than its industry’s projected rise of 3%.

Based in Kansas City, MO, Kansas City Southern KSU is a transportation holding company that has railroad investments in the United States, Mexico and Panama. The stock has seen the Zacks Consensus Estimate for current-year earnings being revised 3.1% upward over the past 60 days. The stock’s expected earnings growth rate for the current year is 16.2%, higher than its industry’s projected rise of 6%.

United Airlines Holdings UAL, based in Chicago, carries a Zacks Rank #2. The company operates more than 4,800 flights a day to 353 airports across multiple destinations. The stock has seen the Zacks Consensus Estimate for current-year earnings being revised 2.5% upward over the past 60 days. The stock’s expected earnings growth rate for the current year is 31.5%, higher than its industry’s projected rise of 3%.

Costamare CMRE is a leading owner and charterer of containerships to major liner companies Costamare, based in Greece, sports a Zacks Rank #1. Over the past 60 days, the company has seen the Zacks Consensus Estimate for current-year earnings increase 25.7%. The stock’s expected earnings growth rate for the current year exceeds 100%, comparing favorably with its industry’s projected decline of 9.1%. 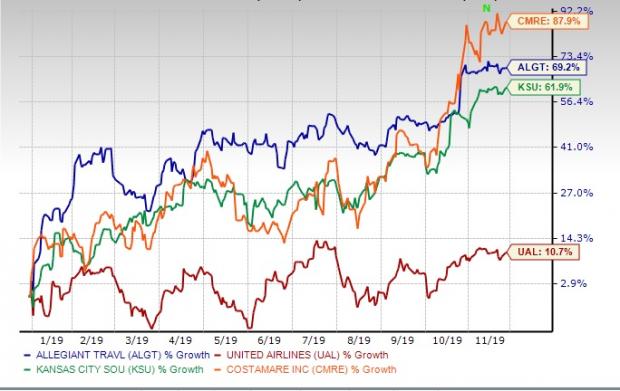