October sales pace for newly constructed homes looks strong despite recording a marginal decline from the prior month. Moreover, the reading surpassed market expectation by 3.8%, signaling sturdy housing demand on the back of lower home prices and borrowing costs.

Let’s see how the current sales picture will frame the industry’s future.

No Reason to Worry 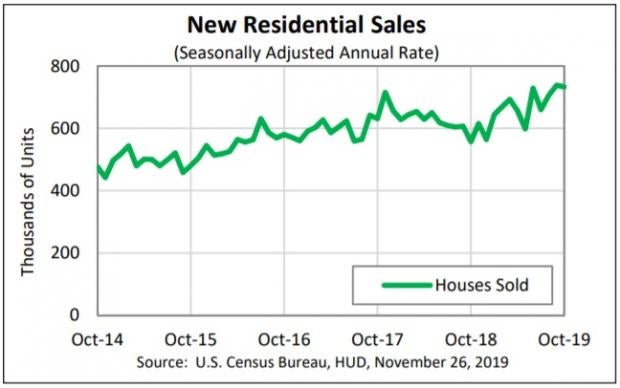 Sales of newly constructed single-family homes — accounting for roughly 10% of U.S. home sales — dipped slightly in October from the prior month to a seasonally adjusted annual rate of 733,000 units, per data released by the Commerce Department. Nonetheless, the sales were 31.6% higher than October 2018.

Importantly, September’s reading was upwardly revised from 701,000 to 738,000. October and September sales figures mark the two strongest readings since July 2007.

Regionally, new home sales in the South — accounting for bulk of transactions — dropped 3.3% in October. Although sales in the Northeast declined 18.2%, sales increased 4.2% and 7.1% in the Midwest and West, respectively.

The supply of new homes inched up 0.3% from September to 322,000 in October. However, housing inventory decreased 3.3% from the year-ago period. It would take just 5.3 months to deplete the current supply of homes, up from 5.2 months in September.

In the words of Greg Ugalde, chairman of the National Association of Home Builders, and a home builder and developer from Torrington, CT, “Forty-five percent of homes sold in October were priced below $300,000, which is an indication that more millennial buyers are taking advantage of low mortgage rates and entering into the marketplace.”

Per the recent The Mortgage Bankers Association’s Builder Application Survey, mortgage applications for new home purchases increased 31.5% in October from a year ago and 9% from September.

So far this year, the Zacks Homebuilding Industry has rallied 51.3%, comparing favorably with 23.7% rally of the S&P 500 composite. Moreover, a good industry rank (top 10% of more than 250 industries) supports its growth potential. 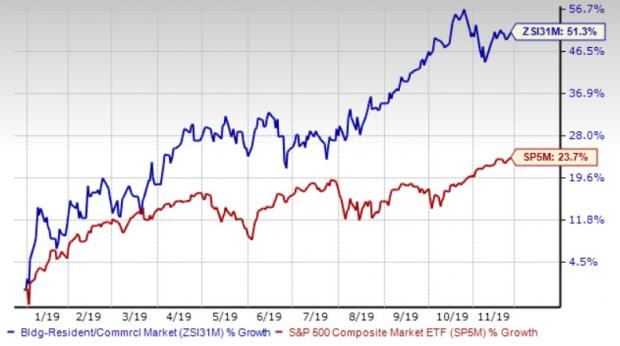 Also, homebuilder sentiment — which marked the second highest reading in November since June 2018 — and October housing starts and permits — which recorded strong growth in more than the past 12 years — are promising signs for the housing market.