The divestment deal reflects ReneSola’s progress in achieving its goal of $100 million cash flow generation from monetization of projects.

The solar market is still at a nascent stage in Poland, where coal currently accounts for 80% of energy generation. However, the Polish solar market has been witnessing a rapid development in recent times. Evidently, at the end of September, total solar generation capacity in the nation reached 1,007.2 MW, according to figures provided by the Polish government and based on data from grid operator Polskie Sieci Elektroenergetyczne S.A.

At the end of 2018, Poland’s operational photovoltaic (PV) capacity stood at around 486 MW, with 214 MW yearly deployment. This means that most of the current operational capacity – around 520 MW – was installed in the first nine months of 2019.

Going ahead, the Polish solar market is expected to grow consistently, with its government planning to triple its solar energy capacity by end of this year (per a Reuter’s report).  In addition, a further PV auction will take place in December 2019, with a tender volume of 750 MW of solar capacity. This increases ReneSola’s probability of securing more solar projects in this country, which in turn, should boost its profitability.

In fact, the projects for which it has divested the development rights to SUNfarming are part of the 26 solar utility projects that ReneSola won from a Polish auction in November 2018.

With the rapidly expanding solar market across the globe, monetization of projects is significantly favoring solar players and boosting their top-line performance. For instance, during the third quarter of 2019, ReneSola sold a 55-megawatt portfolio of ground-mounted solar farms in Poland, and signed an agreement to sell 22.3 megawatts of DG projects in China. In October, the company entered into agreements to sell 24 small-scale DG projects in Hungary to Optum — a leading international solar investment company.

Other solar players like ReneSola, which offer valuable solar energy solutions, are also following this strategy. In November, JinkoSolar JKS entered an agreement to sell two solar power plants in Mexico, with a combined capacity of 155 megawatts.

Canadian Solar’s CSIQ global late-stage project pipeline stands at 3.4 gigawatt as of Sep 30, 2019, which the company is committed to monetize in the coming days.

Considering this well practiced trend, we may expect to witness more such solar project divestment deals in future.

Shares of ReneSola have declined 9.4% in a year’s time against the industry’s 29.5% growth. 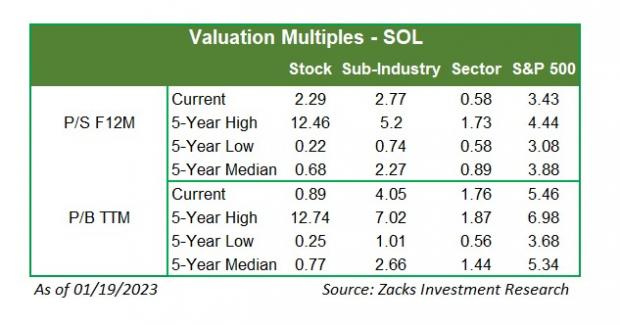 ReneSola currently has a Zacks Rank #3 (Hold). A better-ranked stock in the same space is SolarEdge Technologies Inc. SEDG, which carries a Zacks Rank #2 (Buy). You can see the complete list of today’s Zacks #1 Rank (Strong Buy) stocks here.