Shares of Owens-Illinois, Inc. OI have plunged 44% year to date compared with the stocks in the industry that posted a cumulative decline of 28.4%. This downside partly resulted from the lackluster guidance for the current year due to weaker demand, capacity curtailments, impact of foreign-exchange headwinds, higher tax rate and impact of increased operational complexities. 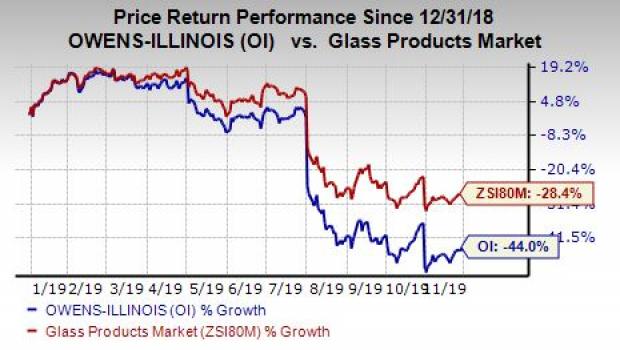 Owens-Illinois’ shares have dropped 11.1% since it reported third-quarter 2019 results on ….. The company reported adjusted earnings of 54 cents per share in the quarter, down 28% from the prior year. Net sales declined 3.8% year over year to $1,670 million, as unfavorable currency translation and lower sales volume muted favorable pricing and contribution from the Nueva Fanal acquisition. Global shipments were down 1% year over year in the reported quarter, reflecting sluggish market growth, particularly in Mexico and China, and persistent weak demand for beer and non-alcoholic beverages in the United States.

Sales volume was primarily affected by lower shipments to food and alcoholic beverage customers, mainly due to the ongoing trends in beer shipments. The company also witnessed lower demand in China and the country is undergoing capacity curtailment. Overall, Owens-Illinois anticipates volume to be down 1% this year. Further, the persistent decline of beer consumption in the domestic market is another major headwind.

For fourth-quarter 2019, Owens-Illinois anticipates adjusted earnings per share of 45-50 cents compared with the adjusted earnings of 61 cents per share reported in fourth-quarter 2018. The benefit of higher selling prices and accretion from the Nueva Fanal acquisition will likely be offset by lower volumes, unfavorable foreign-currency headwinds and higher effective tax rate. In response to lower sales, the company plans to curtail capacity in the United States and Mexico in the ongoing quarter.

Furthermore, Owens-Illinois has lowered its adjusted earnings per guidance for 2019 to $2.20-$2.25 from $2.40-$2.55, thanks to softer demand, capacity curtailments, and unfavorable foreign-currency translation impact. The mid-point of the guidance reflects a year-over-year decline of 18%. The lowered guidance also includes the impact of higher effective tax rate and continued increased complexity.

The company is trying to counter the unfavorable impact of mega-beer decline with new business in growing categories. However, this change in new business mix is giving rise to more operational complexities and higher costs, which might impact Owens-Illinois’ results. Additionally, commissioning new capacity for future growth has resulted in more cost than originally anticipated.

Owens-Illinois is poised to benefit from focus on improving factory performance, cost reduction and innovations. In addition, the company is focused on investments in business. It intends to achieve this by investing in joint ventures and incremental capacity, and through bolt-on acquisitions in emerging geographies. Owens-Illinois’ joint venture (JV) with Constellation Brands, Inc. STZ and long-term sales contracts in Mexico will likely mitigate the impact of the prevalent decline in mega beer in the United States.

Glass packaging in Western Europe has been rising for the last two years. The company’s efforts to add capacity in Europe, boost supply-chain performance, focus on growing strategic relationships and footprint optimization poise it well for improving volumes and expanding margins in the region.

In the United States, demand for glass is growing, propelled by favorable consumer trends and increased preference of customers for glass packaging. Demand for non-beer customer continues to grow in low-single digits in the nation. Thus, the company is converting almost 20% of its beer capacity into flexible capacity to meet demand for non-beer categories. In the Asia Pacific, benefits from the asset-advancement program and growing demand in emerging markets will drive volumes, while efforts to lower structural costs will expand margins.

Owens-Illinois has acquired 49.7% interest in Empresas Comegua S.A. The buyout will help the company expand its presence into new and growing glass markets in Central America, as well as fortify market presence in the Caribbean. The Nueva Fanal buyout, along with the previous acquisition of Vitro's food and beverage business, solidifies Owens-Illinois’ position in the attractive and growing glass segment of the packaging market in Mexico.

We believe these factors will benefit Owens-Illinois’ results and help drive a recovery in its share price.

Some better-ranked stocks in the Industrial Products sector are Northwest Pipe Company (NWPX - Free Report) and Tennant Company TNC. Both the stocks sport a Zacks Rank #1 (Strong Buy). You can see the complete list of today’s Zacks #1 Rank stocks here.

Northwest Pipe has an expected earnings growth rate of 15.8% for the current year. The stock has appreciated 43.4% in a year’s time.