Per a report published by Fitch last year, an additional 17 gigawatts (GW) of solar photovoltaic plants are predicted to be connected to the Japanese grid between 2018 and 2020. This indicates that Japan has a flourishing solar energy market, which offers growth prospects for solar companies like Canadian Solar.

Currently, in Japan, Canadian Solar's late-stage portfolio of ready to build, under construction or operational projects stands at approximately 217 MWp. Considering the expanding solar market in this nation, monetization of this project pipeline should boost Canadian Solar’s profit margin, in the coming days.

With the rapidly expanding solar market across the globe, monetization of projects is significantly favoring solar players and boosting their top-line performance. To this end, it is imperative to mention that Canadian Solar’s global late-stage project pipeline stands at 3.4 gigawatts as of Sep 30, 2019, which the company is committed to monetize in the coming days.

Other solar players like Canadian Solar, which offer valuable solar energy solutions, are following this strategy to reap the benefits of the enhancing solar market globally. For instance, in October 2019, ReneSola (SOL - Free Report) entered into agreements to sell 24 small-scale DG projects in Hungary to Optum — a leading international solar investment company.

In November, JinkoSolar (JKS - Free Report) signed an agreement to sell two solar power plants in Mexico, with a combined capacity of 155 megawatts.
Considering this well-practiced trend, we may expect to witness more such solar project divestment deals in future.

Shares of Canadian Solar have slipped 0.5% in a year’s time against the industry’s 36.2% growth. 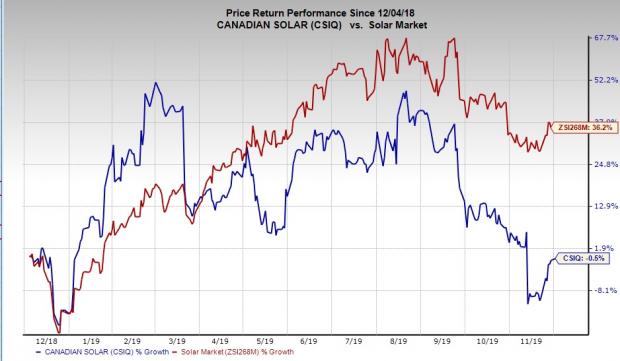