Here's Why You Should Hold Onto Sherwin-Williams for Now

The Sherwin-Williams Company (SHW - Free Report) is gaining from demand strength in the domestic market, its focus on growth through expansion of operations, productivity improvement initiatives and synergies of the Valspar acquisition amid certain headwinds including weak non-domestic demand.

The paints and coatings giant has seen its shares rally 46.8% year to date, outperforming the 42.9% rise of its industry. 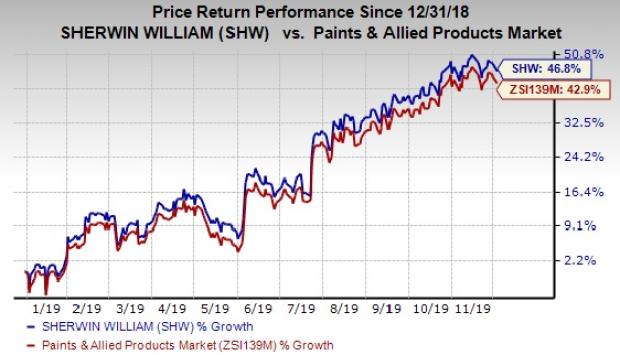 Sherwin-Williams is witnessing favorable demand in its domestic end-use markets and remains committed to expand its retail operations. It is focused on capturing a larger share of its end-markets, as reflected by an increasing number of retail stores. The company added 31 net new stores in the first nine months of 2019. Plans are in place to add around 80-100 net new stores in North America by the end of 2019.

The company is also gaining from synergies of the Valspar acquisition. It expects to achieve total annual run rate synergies of around $415 million at the end of 2019.

Sherwin-Williams is seeing weak demand outside of the United States. The company witnessed relatively softer demand in non-domestic regions during the third quarter, especially Asia and Europe, where sales were down by high and low-single digit percentages, respectively. Trade issues have led to softness in markets in Asia.  The company expects sales in its Performance Coatings Group unit to decline by low-single digits in the fourth quarter factoring in soft industrial demand in non-domestic markets.

Orion Group Holdings has an expected earnings growth rate of 54.1% for the current year and sports a Zacks Rank #1 (Strong Buy). The company’s shares have gained 22% over the past year. You can see the complete list of today’s Zacks #1 Rank stocks here.

Gibraltar Industries has an expected earnings growth rate of 19.2% for the current year and carries a Zacks Rank #1. Its shares have rallied 45.1% in the past year.

MasTec has an expected earnings growth rate of 36.6% for the current year and carries a Zacks Rank #2 (Buy). Its shares have surged 48.8% in the past year.

Bank of Montreal (BMO) Down 1.8% Despite Higher Q4 Earnings