Huntington Ingalls Industries, Inc.’s HII business segment, Newport News, recently secured a contract for completing 12 months of execution planning to support ship repair and alteration requirements for CVN 78 planned incremental availability. Work related to the deal is scheduled to be over by September 2020.

Valued at $11.5 million, the contract was awarded by the Supervisor of Shipbuilding, Conversion and Repair, U.S. Navy, Newport News, VA.
Through this deal, Huntington Ingalls will support ship repair and alteration requirements for CVN 78 planned incremental availability. The entire task will be executed in Newport News, VA.

USS Gerald R. Ford (CVN 78) is the first new design for an aircraft carrier since USS Nimitz (CVN 68). The ship is equipped with two newly-designed reactors and has 250% more electrical capacity than previous carriers. These features will allow the ship to load weapons and launch aircraft faster than ever before.

In 2017, the company delivered the U.S. Navy's newest carrier — USS Gerald R. Ford (CVN 78) — and continues to be the exclusive prime contractor for nuclear aircraft carrier refueling and complex overhaul (RCOH). It is currently performing the RCOH of USS George Washington (CVN 73) and 60% of the RCOH is complete (as of Sep 30, 2019).

Huntington Ingalls is one of the largest military shipbuilders in the United States. Over 70% of the active Navy fleet consists of this company’s ships.
In particular, this military shipbuilder’s Newport News division is the nation’s sole designer, builder and refueler of nuclear-powered aircraft carriers. Considering this unit’s aforementioned expertise in aircraft carriers, it is quite obvious that this division frequently secures shipbuilding- related contracts from the U.S. Navy and the country’s foreign allies. The latest contract win is a further testament to that.

As a result, the Newport News division is considered to be the major contributor to Huntington Ingalls’ revenue growth. In the third quarter of 2019, the segment generated revenues of $1.3 billion, constituting 57.5% of the company’s total revenues. We may expect this segment to reflect similar growth trends in the coming days as the current U.S. administration focuses on expanding its defense base immensely.

Looking ahead, the U.S. budget proposal for fiscal 2020, comprising the biggest naval budget request in more than 20 years, should bode well for renowned shipbuilders like Huntington Ingalls.

In a year’s time, shares of Huntington Ingalls have gained 16.5% compared with its industry’s 12.7% growth. 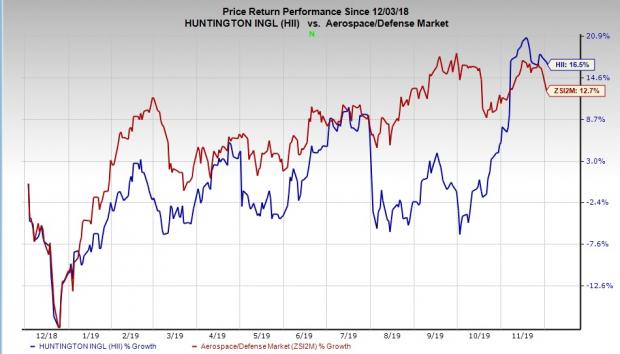 Northrop Grumman delivered an average positive earnings surprise of 11.48% in the last four quarters. The Zacks Consensus Estimate for 2019 earnings has risen by 3.8% to $20.38 over the past 90 days.

L3Harris Technologies delivered an average positive earnings surprise of 5.02% in the last four quarters. The Zacks Consensus Estimate for 2019 earnings has risen by 7.5% to $9.99 over the past 90 days.