Shares of Arconic Inc. (ARNC - Free Report) have gained 16.6% over the past three months. The company has also outperformed its industry’s rise of 11.6% over the same time frame.

Arconic, a Zacks Rank #2 (Buy) stock, has a market cap of roughly $13.1 billion. Average volume of shares traded in the last three months was around 2,994.5K. 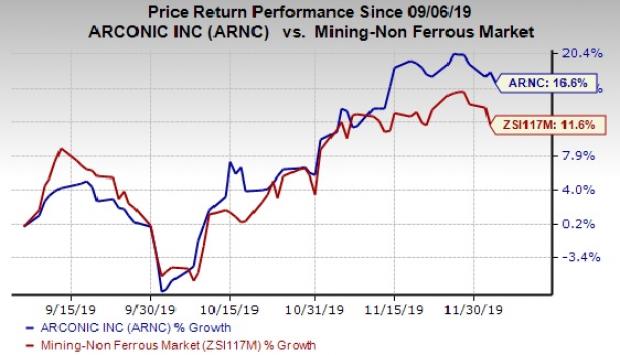 Solid third-quarter earnings performance, upbeat outlook and strong growth prospects have contributed to the gain in Arconic’s shares. Arconic’s adjusted earnings per share for the third quarter were 58 cents, up from 32 cents a year ago. It also topped the Zacks Consensus Estimate of 53 cents.

The company also raised its earnings guidance for full-year 2019. Arconic now expects adjusted earnings in the range of $2.07-$2.11 per share for 2019, up from its earlier expectation of $1.95-$2.05 per share. The revised guidance partly reflects the benefits of its cost reduction actions.

The Zacks Consensus Estimate for earnings for 2019 is currently pegged at $2.14 per share, reflecting an expected year-over-year growth of 57.4%.

Arconic is focused on cost reduction and operational improvements across its businesses, which should drive its bottom line in 2019. The company has raised the annualized cost reduction commitment to roughly $280 million on a run-rate basis, from its prior expectation of $260 million. It expects to capture around $180 million of savings in 2019, also up from earlier commitment of $140 million.

Moreover, the company is gaining from demand strength in automotive and aerospace markets. The company is seeing healthy demand in aero engines and aero defense markets with double digit growth in organic revenues as witnessed in the third quarter. Volume gains in the commercial transportation market is also contributing to its organic revenue growth. Strength across these key markets is expected to support the company’s full-year revenues.

Kirkland Lake Gold has projected earnings growth rate of 97.1% for the current year and sports a Zacks Rank #1 (Strong Buy). The company’s shares have surged around 82% in a year’s time. You can see the complete list of today’s Zacks #1 Rank stocks here.

Agnico Eagle has a projected earnings growth rate of 168.6% for the current year and carries a Zacks Rank #2. The company’s shares have rallied roughly 60% in a year’s time.

Franco-Nevada has estimated earnings growth rate of 46.2% for the current year and carries a Zacks Rank #2. The company’s shares have shot up roughly 38% in a year’s time.