Celanese (CE) Shares Up 36% YTD: What's Behind the Rally?

Shares of Celanese Corporation (CE - Free Report) have surged 35.7% so far this year. The leading chemical and specialty materials maker has also handily outperformed its industry’s rise of 15.2% over the same time frame. Moreover, it has outpaced the S&P 500’s rise of around 24% year to date.

Celanese has a market cap of roughly $14.8 billion and average volume of shares traded in the last three months was around 767.3K. The company has an expected long-term earnings per share growth rate of 7.1%. 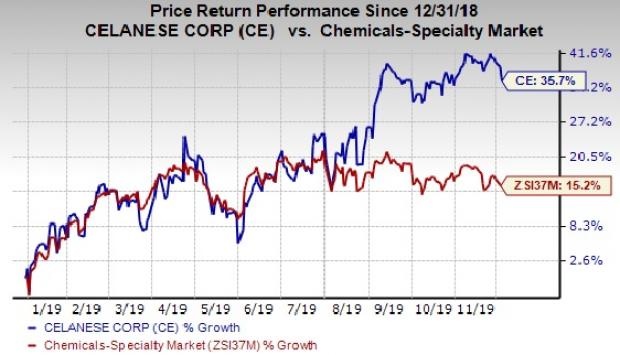 Let’s take a look into the factors that are driving this Zacks Rank #3 (Hold) stock.

Better-than-expected earnings performance in the first three quarters of 2019 and upbeat business prospects have contributed to the run-up in Celanese’s shares. Celanese is gaining from its inorganic growth actions, productivity measures and growth investments in organic projects amid a challenging environment. The company remains focused on strengthening its businesses by executing its productivity programs and strategically investing in high-return projects.

Celanese’s strategic measures including cost savings through productivity initiatives, price increase actions and efficiency enhancement are expected to support its earnings in 2019. The company is committed to execute its productivity programs that include implementation of a number of cost reduction capital projects.

Acquisitions are also providing Celanese with opportunities for additional growth and synergies. The acquisitions of SO.F.TER., Nilit and Omni Plastics are expected to significantly contribute to earnings expansion in the company's Engineered Materials (EM) segment.

The EM unit is also poised to benefit from new business wins and significant project commercialization. The company commercialized 1,315 projects during the third quarter, which contributed to its volume growth on a sequential comparison basis. It is on track to commercialize more than 4,000 projects in 2019.

Kirkland Lake Gold has projected earnings growth rate of 97.1% for the current year and sports a Zacks Rank #1 (Strong Buy). The company’s shares have surged around 82% in a year’s time. You can see the complete list of today’s Zacks #1 Rank stocks here.

Agnico Eagle has a projected earnings growth rate of 168.6% for the current year and carries a Zacks Rank #2 (Buy). The company’s shares have rallied roughly 60% in a year’s time.

Franco-Nevada has estimated earnings growth rate of 46.2% for the current year and carries a Zacks Rank #2. The company’s shares have shot up roughly 38% in a year’s time.