Agnico Eagle (AEM) Shares Up 52% Year to Date: Here's Why

Shares of Agnico Eagle Mines Limited (AEM - Free Report) have surged 51.8% so far this year. The gold mining company has also outperformed the industry’s rally of 42.1% and the S&P 500’s rise of 22.1% year to date. 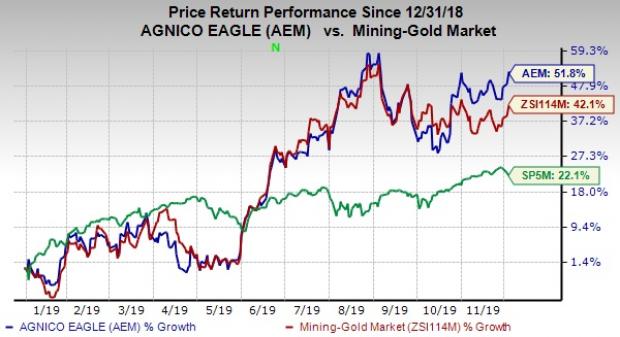 Let’s discuss the factors behind the stock’s price appreciation.

Better-than-expected earnings performance in the first three quarters of 2019 and healthy prospects from key growth projects have been contributing to the company’s performance.

Agnico Eagle has an impressive earnings surprise history. It has surpassed the Zacks Consensus Estimate in the trailing four quarters, the average being by 245.9%.

Moreover, earnings estimate revisions have the greatest impact on stock prices. The Zacks Consensus Estimate for Agnico Eagle’s earnings has moved north in the past two months. Over this period, earnings estimates for the fourth quarter have moved up 12.1% while the same for 2019 have advanced 17.1%.

In October, the company revised production guidance for 2019. Gold production for the year is projected in the band of 1.77-1.78 million ounces, up from 1.75 million ounces expected earlier. Notably, the projection includes pre-commercial production from Meliadine and Amaruq.

Moreover, the Amaruq satellite deposit at the Meadowbank Complex achieved commercial production on Sep 30, 2019. The start of production at the Meliadine and Amaruq projects is expected to enable Agnico Eagle to generate net free cash flow in second-half 2019. It will also enable the company to lower net debt and increase dividend payout while steadily expanding business.

As such, these key growth drivers are likely to support the company’s earnings in 2019.

Kirkland Lake Gold has an expected earnings growth rate of 97.1% for the current year. The company’s shares have surged 57.1% year to date.

Sibanye Gold has projected earnings growth rate of 228.1% for 2019. The company’s shares have skyrocketed 205.3% so far this year.

Franco-Nevada has an estimated earnings growth rate of 46.2% for the current year. Its shares have appreciated 38.9% year to date.