Vodafone, which has Europe’s largest 5G network across 58 cities, is considered to be a global leader in IoT with more than 90 million connections. AWS Wavelength provides developers with the ability to build applications that serve end users with millisecond latencies over the 5G network. AWS Wavelength at the edge of Vodafone’s 5G network is likely to provide multi-access edge computing capabilities to developers, IoT and end users.

Reportedly, AWS Wavelength will be available first in the United Kingdom and Germany on Vodafone 5G network, with plans to expand to more markets across Europe. Vodafone Business and AWS are bringing the AWS cloud closer to the devices that need it by running the Wavelength in locations within its 5G network.

At September end, Vodafone had almost 625 million mobile customers, 27 million fixed broadband customers and 22 million TV customers. The company has mobile operations in 24 countries, partners with mobile networks in 42 more, and fixed broadband operations in 19 markets. In November, Vodafone announced that it is moving data processing and storage from its own premises to Google Cloud, and using Google’s real time analysis tools to develop new services for business clients while streamlining its operations across 24 countries.

The company is increasingly focusing on the rollout of superfast 5G technology across the United Kingdom. It inked an agreement with Openreach, the digital networking business unit of BT Group Plc, to augment its broadband coverage. The deal has enabled Vodafone to deliver its Gigafast Broadband service to three additional cities, namely Birmingham, Bristol and Liverpool by spring 2020 through Openreach’s Fiber to the Premises network.

Vodafone has long-term earnings growth expectation of 14.5%. Driven by strong execution of operational strategies, the stock has gained 17.9% against the industry’s decline of 6.6% in the past six months. 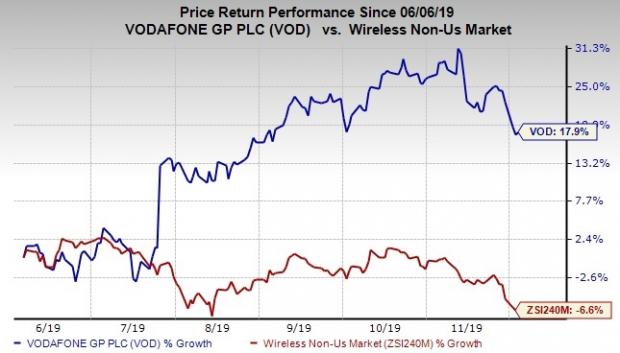 A couple of better-ranked stocks in the broader industry are Qualcomm Incorporated QCOM and Ubiquiti Inc. UI, both sporting a Zacks Rank #1 (Strong Buy). You can see the complete list of today’s Zacks #1 Rank stocks here.