In the past five trading days, telecom stocks witnessed a downtrend on President Trump’s hint that there is no specific deadline for the ongoing “Phase One” deal between the United States and China. On cue, the market went on a tailspin, dragging the telecom sector down as uncertainty and unpredictability took centerstage. With China issuing strong protests for U.S. legislations supporting Hong Kong protesters that reportedly meddled in so-called ‘internal affairs’, the outlook for the partial trade accord appeared murkier. However, the stocks showed some signs of a rebound in the later stages of the week as media reports confirmed that the deal was around the corner.

As the clock ticks on the imposition of a fresh round of U.S. tariffs on Dec 15 on $156 billion of imports from China, both sides are likely to seek an early resolution of the trade disputes on domestic compulsions. Although the optimism regarding the partial trade accord has been punctured with Trump hinting that the deal could spill off well in 2020, recent media reports have confirmed that the deal is to back on track.

Meanwhile, the Trump administration is planning to utilize $60 billion funds earmarked for the U.S. International Development Finance Corporation (“DFC”) to thwart China-based telecom equipment manufacturers Huawei and ZTE. The move is the latest in a string of concerted efforts by the U.S. government to dissuade other sovereign countries from using Huawei and ZTE gear to preempt alleged spying and siphoning of data. The United States has extensively used its diplomatic channels in the past to urge its allies to shun Huawei from their 5G wireless networks, citing security threat and espionage by China’s government. The government now seeks to undertake a more proactive measure to fructify its ploy by possibly leveraging DFC tools to support purchases of non-Chinese telecom gear by issuing credit to Huawei’s European rivals. Industry grapevines further hint that DFC could also take minority equity stake in companies and offer loans, loan guarantees and political risk insurance.

Huawei has vehemently opposed the unilateral steps by the U.S. authorities and has filed a lawsuit against the ‘unconstitutional’ ruling to ban the use of federal subsidies by rural firms to buy its equipment, urging the court to overturn the order. The company is also reportedly mulling to shift its U.S. operations to Canada against constant vigilantism and stiff opposition.

The telecom and media giant projects consolidated revenues at a CAGR of 1-2% from 2020-2022, and EBITDA margins to grow 200 basis points by 2022. While revenue growth is expected mainly from wireless, WarnerMedia and Mexico, margin expansion is likely to come from wireless, merger synergies, Mexico, and cost-reduction initiatives. (Read more: AT&T's CFO Discusses 2020-2022 Targets With Stockholders)

5.     Nokia Corporation NOK has reportedly submitted a proposal to the EU to amicably resolve the patent licensing disputes with leading European automobile manufacturers. The move could preempt a potential investigation by the European Commission and the consequent imposition of fine if Nokia was found to be at fault, probably preventing legal hassles and bad publicity associated with it.

With the draft proposal, Nokia has offered an olive branch to initiate constructive dialogue on the issue for a workable solution for the overall improvement of the automotive sector. Meanwhile, the European Commission has refused to comment on the industry grapevines. (Read more: Nokia Aims to Settle EU Patent Licensing Row With Daimler) 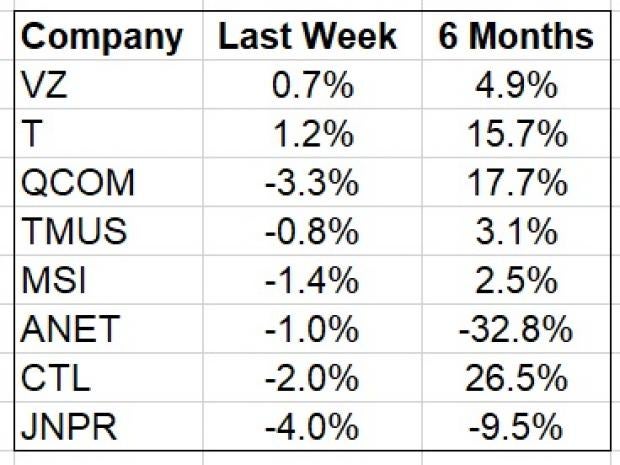 Over the past six months, the Zacks Telecommunications Services industry has recorded average growth of 3.9% and the S&P 500 has rallied 10.3%.

In addition to product launches, strategic deals and 5G deployments, all eyes will remain glued to how the government handles the various issues relating to the “Phase One” deal.