CIT Group Inc. (CIT - Free Report) has been successful in streamlining its business to simplify operations and become a regional commercial banking institution. Moreover, its efforts to diversify revenues through acquisitions are commendable and will likely aid growth.

However, elevated expenses and worsening credit quality continue to be key near-term concerns for the company.

Also, the Zacks Consensus Estimate for its current-year earnings has been revised marginally downward over the past 30 days, reflecting that analysts are not optimistic regarding its earnings growth potential. Thus, the company currently carries a Zacks Rank #3 (Hold).

Notably, CIT Group’s shares have gained 14.9% so far this year, underperforming 18.9% growth of its industry. 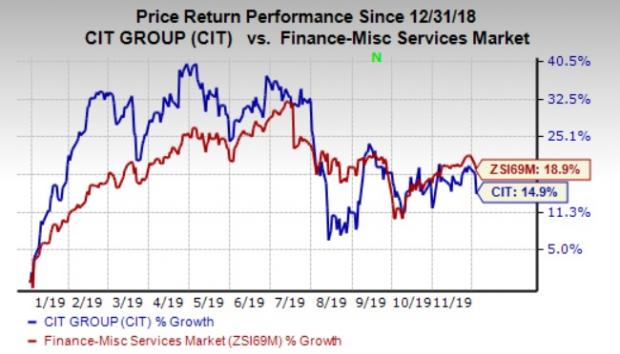 The company remains well-positioned for organic growth, supported by an improving economy and steady demand for finance across various industries. Moreover, its deal to acquire Mutual of Omaha Bank for $1 billion is expected to be accretive to its earnings.

Also, CIT Group’s efforts to restructure the balance sheet through repayment and refinancing of high-cost debt should lower its funding costs and continue to support net finance margin growth.

Further, the company has been exempted from being subject to the Federal Reserve’s annual stress tests. In fact, given a solid capital position, it remains well-poised to deploy capital meaningfully, thereby continuing to enhance shareholder value.

However, the company’s operating expenses have witnessed a four-year (2015-2018) CAGR of 2.4% primarily due to higher compensation costs, professional fees and technology costs. While it plans to cut roughly $50 million in annual expenses by 2020, overall costs are expected to remain elevated, given its growth efforts and continued investments in franchise.

Moreover, deteriorating credit quality is a cause of concern for CIT Group. Provision for credit losses witnessed a five-year (2014-2018) CAGR of 13.1%. In fact, the company’s intention to become a leading national middle-market bank is expected to lead to a rise in loans, thereby resulting in higher provisions.

Further, sluggish growth in industries, where CIT Group provides finance, remains a concern as it might hamper its prospects as borrowers may not be able to make timely payments of loans and interest.

Moody's has witnessed an upward earnings estimate revision of 1.7% for the current year over the past 60 days. Its share price has increased 2.8% over the past three months.

On Deck Capital has witnessed an upward earnings estimate revision of 12.1% for the current year over the past 60 days. Its share price has increased 21% over the past three months.

PRA Group’s Zacks Consensus Estimate for earnings for the current year has been revised 5.3% upward over the past 60 days. Its shares have gained 5.6% over the past three months.