Univar Solutions Inc. UNVR announced a definitive deal under which its Environmental Sciences business will be acquired by affiliates of AEA Investors LP for $195 million.

Univar plans to use net proceeds from the sale to further pay down debt.

The transaction is slated to be closed by the end of 2019 or early 2020, subject to the receipt of regulatory clearances, and satisfaction of other customary closing terms and conditions. On completion of the transaction, the independent Environmental Sciences business will announce new name and brand identity.

Vice president of Environmental Sciences, Trace McEuen, will continue to lead the business under AEA's ownership.

Piper Jaffray & Co. and Stinson LLP are acting as the financial advisor and legal counselor, respectively, for Univar, in connection with the deal.

Univar intends to continue focusing extensively on increasing the value of its core chemical distribution and ingredient business as well as realizing the maximum value from its integration with Nexeo Solutions.

Univar’s shares have gained 28.5% over a year against a 19.3% decline recorded by its industry. 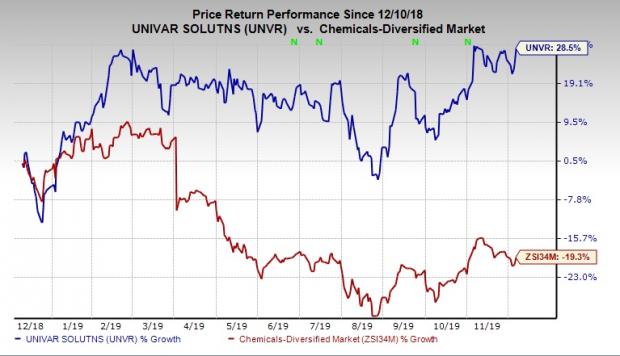 In the last month, the company revised the adjusted EBITDA forecast for 2019, factoring in the lower-than-expected demand for chemicals and ingredients. Further, Univar expects adjusted EBITDA of $700-$725 million for the year compared with $725-$740 million mentioned earlier.

Moreover, the company expects adjusted EBITDA of $155-$180 million for the fourth quarter of 2019, suggesting rise from $144 million reported a year ago.

General Moly has an expected earnings growth rate of 12.5% for the current fiscal year. The company’s shares have gained 34% in the past year.

Agnico Eagle has an estimated earnings growth rate of 167.9% for the current year. Its shares have moved up 53.8% in the past year.