Canadian Solar Inc. (CSIQ - Free Report) recently completed the divestiture of its 3.3 MWp Milborne Port project in the U.K. to Elm Trading Group. The solar module developer expects to recognize revenues from the sale in the fourth quarter of 2019.

A Brief Note on the Milborne Port Project

In recent times, Canadian Solar started to develop a pipeline of unsubsidized projects in the U.K. and Europe, on a broader scale, with the cost of solar energy declining and reaching grid parity. In June, the company entered a contract to supply 500-megawatt (MW) solar modules to Solarcentury's projects — Cabrera and Talayuela Solar — in Spain. Both projects, on a combined basis, are anticipated to power 255,000 homes in Europe, on completion.

Evidently, the company strongly continues to focus on expanding its presence and supporting the growth of solar markets in Europe and the U.K.

Per a report from the International Renewable Energy Agency (IRENA), global electricity generation from solar energy is expected to increase to nearly 360 GW per year by 2050 from the current level of 109 GW. To reap the benefits of such overwhelming projections, solar players like Canadian Solar are making notable efforts to significantly expand footprint globally.

For instance, toward the end of the third quarter of 2019, SolarEdge Technologies SEDG shipped a total of 1.5 Gigawatts (AC) of inverters, whereas SunPower Corp. SPWR had more than 145 megawatts of storage pipeline. Moreover, JinkoSolar's JKS in-house annual silicon wafer, solar cell and solar module production capacity totaled 14.5 GW at the end of the third quarter.

Canadian Solar’s shares have gained 8.8% in a month compared with the industry’s growth of 4.8%. 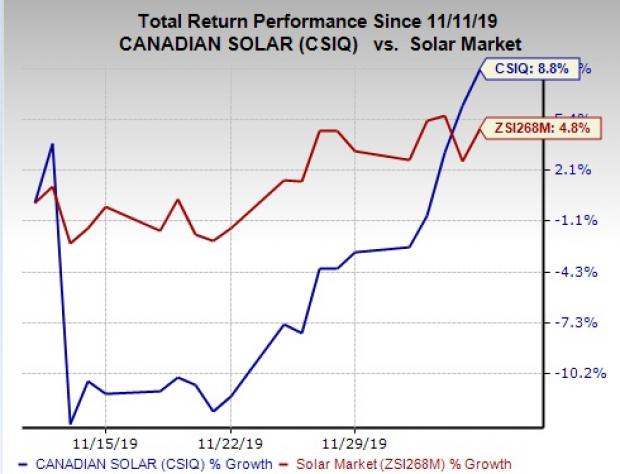