5 Bank Stocks to Avoid Despite No Rate Cut Expectations

At the two-day Federal Reserve Open Market Committee (FOMC) meeting, beginning today, the Fed is likely to hold the interest rate at the current levels, after cutting it thrice this year. At present, the benchmark federal funds rate stands at 1.50% to 1.75%. Per the CME Group FedWatch tool, the odds of the central bank keeping it the same are as high as 99%.

Going back to the press conference following the last FOMC meeting in October, Chairman Jerome Powell had said, “We see the current stance of monetary policy as likely to remain appropriate as long as incoming information about the economy remains broadly consistent with our outlook of moderate economic growth, a strong labor market, and inflation near our symmetric 2 percent objective.”

Since then, a slew of favorable economic data including third quarter real GDP growth rate (second estimate) of 2.1%, better-than-expected job creation in November and resilience of American consumers have been pointing toward no further change in rates. While this bodes well for the banking sector, concerns like trade conflict, uncertainty related to Brexit and expectation of gradual economic slowdown, which had led the Fed to cut rates, persist.

Apart from these, banks’ profitability is expected to be under pressure amid slowdown in loan demand, flattening of the yield curve and rising expense base. Lower interest rates will continue to hurt interest income growth as well as compress net interest margin, which is the main indicator of a bank’s profitability.

To overcome these challenges, banks continue to undertake measures like slashing jobs, reducing footprint, technological advancements and restructuring operations. Banks are also looking for avenues to diversify revenues and even expand inorganically.

But these efforts don’t seem to be enough for generating solid returns in the near term. Thus, we suggest avoiding a few banking stocks that might not be good bets given the current operating backdrop.

Bank Stocks to Stay Away From Now

While it’s not easy to select such stocks from the vast banking sector universe, we have taken the help of Zacks Stock Screener to make this task relatively simpler.

We have shortlisted five banks with a market capitalization of at least $1 billion and are expected to witness year-over-year decline in current-year earnings. Further, these stocks carry a Zacks Rank #4 (Sell) or #5 (Strong Sell) and have lost 1% or more over the past three months.

Headquartered in San Juan, PR, OFG Bancorp OFG has lost 4.5% over the past three months. With a Zacks Rank of 4, the company’s earnings are expected to decline 7.2% in 2019. It has a market cap of $1.1 billion.

Shares of Washington Federal, Inc. WAFD have declined 1.6% in the three months’ time. This Seattle, WA-based bank’s earnings are expected to fall 4.6% in fiscal 2020. It carries a Zacks Rank #4 and has a market cap of $2.8 billion.

Cadence Bancorporation CADE, based in Houston, TX, carries a Zacks Rank #5. Over the past three months, its shares have lost 6%. The company’s earnings are expected to decrease 13% in 2019. It has a market cap of $2.1 billion.

Home Bancshares, Inc. (Conway, AR) HOMB has a Zacks Rank #4 and its 2019 earnings are projected to decline 1.7%. This Conway, AR-based company has market cap of $3.2 billion and its shares have lost 1.1% over the past three months.

Shares of WesBanco, Inc. (WSBC - Free Report) have declined 1% in the three months’ time. This Wheeling, WV-based bank’s current-year earnings are expected to fall 6.9%. It carries a Zacks Rank #4 and has a market cap of $2.5 billion. 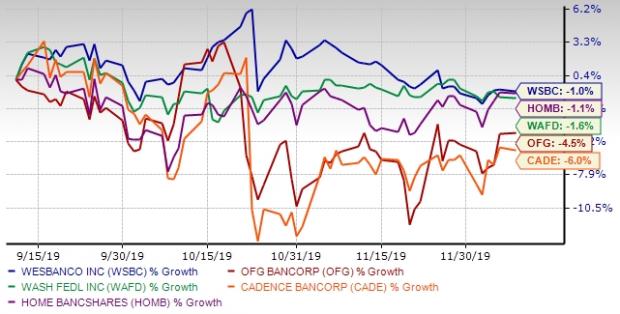 NIKE (NKE) to Report Q2 Earnings: What's in the Offing?