The deal has been awarded by the Naval Air Systems Command, Patuxent River, Maryland. Valued at $153.4 million, the contract will cater to the U.S. Air Force, Navy, Marine Corps and non-U.S. Department of Defense (DoD) participants as well as foreign military sales customers. Work related to the deal is scheduled to be over by July 2022.

Majority of the task will be carried out in Rome, Italy; Redondo Beach, CA, and Fort Worth, TX.

With increased cross-border tensions gripping varied nations across the globe, both developed and developing nations have been ramping up their defense arsenal over the past decade. Notably, military jets comprise major part of the weapon portfolio.

Currently, Lockheed Martin’s supersonic, multi-role fighter jet, F-35, is being used by the defense forces of the United States and 11 other nations.

Of the nearly 3,400 fighters expected to enter the production lines during the next 10 years, 1,548 jets are expected to be F-35s, representing 45.5% of the market. This clearly highlights the importance of the F-35 program in the global fighter jet market.

Such developments reflect solid prospects for Lockheed Martin’s F-35 program, which are likely to bolster the company’s profit margin.

In a year’s time, shares of Lockheed Martin have gained 31.2% compared with the industry’s 20.6% growth. 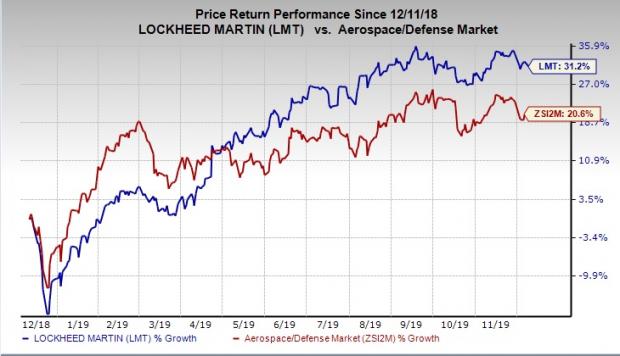 Air Industries Group delivered average positive earnings surprise of 52.78% in the last four quarters. The Zacks Consensus Estimate for 2019 loss has improved 63.6% to 4 cents over the past 60 days.