Amazon AMZN stock has fallen 6% in the past six months, while the S&P 500 has climbed 9% and fellow FAANG stocks Apple AAPL, Alphabet GOOGL, and Facebook (FB - Free Report) have all surged over 15%. Wall Street has pulled back from the e-commerce powerhouse over profits concerns.

The downturn came as Amazon invested heavily in its one-day shipping program for Prime members as it fights back against Walmart WMT and other traditional brick and mortar retailers who have found success in the e-commerce age. This brings us to the question: Is now the time to buy Amazon stock on the dip heading into 2020?

Amazon made headlines to start the week after it said that President Trump put “improper pressure” on the Pentagon to assure that the Joint Enterprise Defense Infrastructure contract, worth $10 billion over the next decade, would not go to the Seattle firm. The JEDI contract instead went to Jeff Bezos’ cloud rival Microsoft MSFT.

The contract itself doesn’t mean that much for a company that is projected to pull in $280 billion in sales this year. Therefore, we won’t linger over the seemingly political dispute.

More importantly, Amazon has slipped recently because investors are worried about its profits and slowing top-line growth. Last quarter, Amazon posted its first year over year quarterly earnings decline since 2017, with its adjusted EPS figure down 26% from Q3 2018—which also fell short of our Zacks estimates. This came after AMZN missed bottom-line estimates in the second quarter, where it also ended its streak of record quarterly profits.

As we mentioned at the top, Amazon’s profits dipped during Q3 because it spent significantly to introduce one-day shipping. AMZN’s world-wide shipping costs soared 46% to $9.6 billion from a year earlier. These efforts are expected to help the firm long-term and fight back against the likes of Walmart, Target TGT, Costco COST, and others who have all bolstered their e-commerce and delivery options.

Amazon’s CEO also noted that the transition means that products will ship from “fulfillment centers very close to the customer,” which could help lower costs down the road. “Customers love the transition of Prime from two days to one day—they’ve already ordered billions of items with free one-day delivery this year. It’s a big investment, and it’s the right long-term decision for customers,” Bezos said in prepared Q3 remarks. 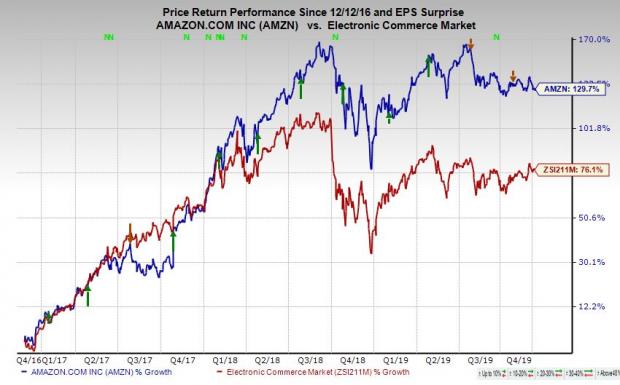 Meanwhile, Amazon’s high-margin cloud computing business, known as Amazon Web Services, saw its revenue surge 35%. This did mark a slowdown compared to recent periods of growth. The firm’s advertising-heavy “other” division helped make up for the slowdown, with sales up 45%. Plus, AMZN is projected to grab the third-largest share of U.S. digital ad dollars in 2019, behind only Google and Facebook.

AWS’ continued success has helped the company expand further into everything from logistics to pharmaceuticals. Amazon is also prepared to compete for years against the likes of Netflix NFLX and Disney DIS in the streaming TV age and it boasts its own Spotify SPOT competitor.

Investors can see in the chart above that AMZN stock has outpaced its Electronic Commerce Market over the past three years, up 130% against its industry’s 76% average climb. This gap, however, has narrowed over the last year, where Amazon stock has now fallen behind the S&P 500 in 2019—16% vs. 24%.

Amazon shares, which are trading at $1,738, currently rest below both their 50 and 200-day moving averages. This is not a place that AMZN stock likes to hang out for too long. Therefore, with AMZN trading roughly 15% below its 52-week highs the stock could be due for a climb.

As one might expect, AMZN’s recent downturn has created a more favorable valuation picture. Amazon is currently trading at 2.6X forward 12-month sales estimates. This marks a discount against its industry’s 3.5X average and its own two-year median of 2.9X and 3.7X high.

Looking ahead, our Zacks estimates call for Amazon’s adjusted fourth-quarter earnings to slip 34% as it continues to beef up its shipping infrastructure. This would mark a larger downturn than last quarter. However, its overall fiscal year EPS figure is projected to pop nearly 2%, with 2020’s figure expected to surge over 29% higher.

Despite its expected temporary bottom-line slowdown, Amazon’s Q4 sales are projected to jump nearly 19%, with FY19’s revenues set to surge 20% to reach $279.11 billion. The company’s 2020 sales are then expected to climb another $52 billion, or 18.5%, above our current-year estimate to come in at a whopping $330.75 billion.

It seems hard to imagine that Amazon’s recent downturn will continue much longer, though stranger things have happened. With that said, investors might want to take a chance on Amazon as we head into 2020, for all of the reasons we just touched on, especially as U.S. unemployment rests at 50-year lows.

Others might want to wait to see signs of a comeback before they possibly jump on Amazon shares.