It is no secret that stocks in the airline space have not had a great time in 2019, which is in its last leg. Headwinds like loss of revenues due to flight cancellations arising out of the grounding of Boeing 737 MAX jets, lackluster cargo business due to reduced freight demand and trade tensions between the United States and China have prevented the stocks from flying high this year.

The downtrend can be made out from the fact that the Zacks Airline industry has significantly underperformed the S&P 500 Index so far this year. The industry has gained 9.6% on a year-to-date basis compared with the S&P 500’s appreciation of 23.9%. 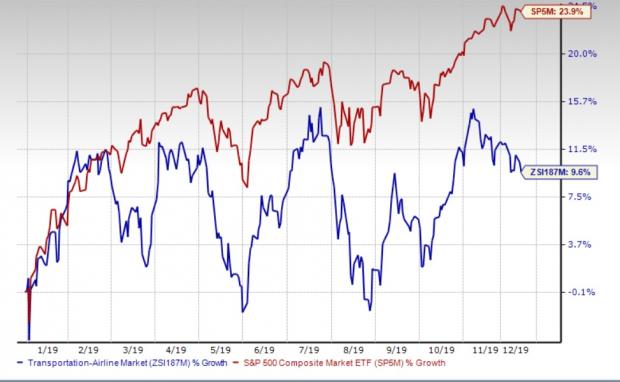 Reflecting these headwinds, the International Air Transport Association (IATA) revised its 2019 profit forecast for the industry to $25.9 billion from the $28 billion forecast provided in June.

However, the research firm expects the picture to be sunnier in 2020. Profitability for the industry is expected to be $29.3 billion (average net profit per departing passenger is predicted to be $6.2 compared with 2019’s estimated figure of $5.7). The outlook for the top line is also brighter at $872 billion, suggesting 4% growth from this year.

The bulk of the global profits ($16.5 billion) is expected from the North American region. However, the figure is lower than $16.9 billion expected in 2019. The North American region, which boasts carriers like Delta Air Lines (DAL - Free Report) and American Airlines (AAL - Free Report) , is likely to witness profit of $16 per passenger, on average, and net margin of 6% next year.

According to the forecast, passenger traffic and capacity are expected to grow at 4.1% and 4.7%, respectively, next year.  Load factor (percentage of seats filled by passengers) for 2020 is expected to decline 40 basis points to 82% as capacity expansion is likely to outweigh traffic growth. The decline in load factor is anticipated to put pressure on yields.

Why the Improved Forecast

It is a well-known fact that there is an inverse relation between crude prices and the value of aviation stocks. Naturally, a decline in oil prices is favorable for carriers as it will result in lower operating expenses. Airlines are likely to benefit in this respect. The IATA expects oil prices to average around $63 (Brent) per barrel in 2020 compared with $65 expected in 2019. Fuel bill for the industry in 2020 is expected to be $182 billion next year, lower than 2019.

Moreover, IATA expects trade growth to pick up in 2020 to 3.3% from 0.9% in 2019 as “election-year pressures in the U.S. contribute to reduced trade tensions.” Due to strong demand for air travel, passenger revenues (excluding ancillaries), which usually account for most of the top line for carriers, are anticipated to touch $581 billion, higher than 2019 levels. IATA expects around 4.72 billion to take to the skies in 2020, up year over year. Moreover, net profit margin is predicted to be 3.4%, again higher than 2019.

In view of IATA’s improved forecast for 2020, we believe that stocks from the space should grace one’s portfolio. We have, thus, selected three airline stocks sporting a Zacks Rank #1 (Strong Buy). You can see the complete list of today’s Zacks #1 Rank stocks here.

Moreover, two of our selected stocks are from Europe since IATA expects profitability of European carriers to increase 27.4% year over year in 2020 to $7.9 billion. Factors like moderate capacity expansion and an uptick in economic growth in the region have contributed to the rosy forecast for European carriers.

Ryanair Holdings (RYAAY - Free Report) is based in Ireland and provides scheduled-passenger airline services. The Zacks Consensus Estimate for its current-year earnings moved up 5.8% in the past 60 days.

Deutsche Lufthansa Aktiengesellschaft (DLAKY - Free Report) functions as an aviation company in Germany as well as internationally. The stock saw the Zacks Consensus Estimate for current-year earnings being revised 18% upward over the past 60 days. Moreover, 2020 earnings are expected to increase 8.8%.

Allegiant Travel Company (ALGT - Free Report) , based in Las Vegas, NV, operates a low-cost passenger airline through its subsidiary Allegiant Air LLC. The stock has seen the Zacks Consensus Estimate for current-year earnings being revised 4.6% upward over the past 60 days. Moreover, 2020 earnings are expected to increase 9.8%.

Banks to End 2019 With Upbeat Trading and IB Performance