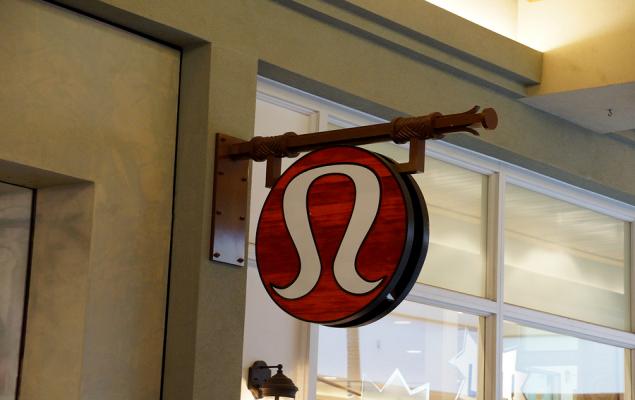 Notwithstanding the strong results, shares of lululemon declined 4.5% in the after-hours trading session yesterday. The decline can be mainly attributed to the company’s fourth-quarter fiscal 2019 earnings guidance, which fell shy of analyst estimates. The company envisions earnings of $2.10-$2.13 per share for the fiscal fourth quarter compared with $1.85 recorded in the year-ago quarter. The current Zacks Consensus Estimate for fourth-quarter earnings is pegged at $2.12 per share.

Providing details on the estimated impacts of tariff and related air freight charges, the company stated that it continues to expect these headwinds to have a negative impact of 4-5 cents on fiscal 2019 earnings within gross margin. Notably, the company incurred nearly 1 cent of these costs in the fiscal second and third quarter each, and expects the remaining 2-3 cent impact to be incurred in the fourth quarter.

Despite these headwinds, lululemon is optimistic about opportunities to boost product margins in the long run. It anticipates gains from the execution of strategies to result in modest gross margin expansion annually through 2023. 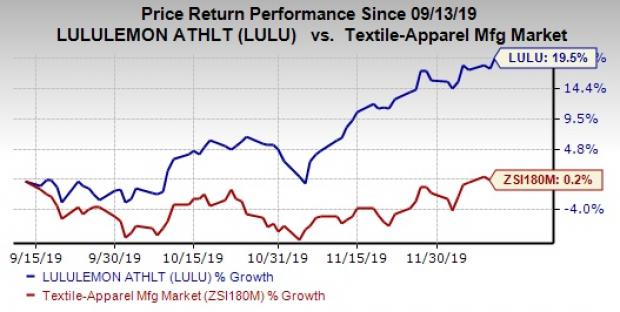 lululemon posted earnings of 96 cents per share, beating the Zacks Consensus Estimate of 93 cents and increased 28% from adjusted earnings of 75 cents in the year-ago quarter. The bottom line gained from solid top-line growth along with gross margin expansion and SG&A leverage.

The Vancouver, Canada-based company’s quarterly revenues advanced about 23% to $916.1 million and surpassed the Zacks Consensus Estimate of $899.4 million. On a constant-dollar basis, revenues rose 23% backed by strong execution across all parts of the business. The improvement can also be attributed to robust total comparable sales (comps) performance and addition of stores. However, currency headwinds impacted revenues by $6.8 million. Notably, e-commerce contributed $247 million to sales, representing about 26.9% of total sales.

Gross profit rose 24% to $505 million in third-quarter fiscal 2019. Moreover, gross margin expanded 70 basis points (bps) to 55.1% on a 120-bps improvement in the product margin, and 10-bps occupancy and depreciation expense leverage. This was partly offset by a 40-bps increase in product and supply-chain costs and a 20-bps negative impact from foreign currency. The product margin expansion was backed by reduced product costs, favorable product mix and lower markdowns. Further, higher product and supply-chain costs stemmed from the ongoing investments in supply chain and product development.

During the fiscal third quarter, the company opened 19 net new stores and completed six optimizations. As of Nov 3, 2019, it operated 479 stores.

As of Nov 3, 2019, cash from operating activities was $95.1 million. Further, it spent nearly $78 million toward capital expenditure in third-quarter fiscal 2019 mainly related to IT and supply-chain investments, and store capital for new locations, relocations and renovations.

During the fiscal third quarter, the company bought back 44.5 thousand shares for less than $8 million, at an average price of $179.71 per share. As of Nov 3, 2019, it had nearly $328 million outstanding under its new $500-million share repurchase plan announced at the beginning of fiscal 2019.

The company expects a marginal increase in gross margin compared with the year-ago quarter. Management anticipates marginal SG&A expense leverage, as a percentage of sales, as it establishes a balance between investments for future growth and efficient cost management. Effective tax rate is expected to be nearly 28.5%.

Earnings for the fiscal year are projected to be $4.75-$4.78 per share, up from $4.63-$4.70 stated earlier. As previously stated, earnings per share include about 4-5 cents of additional costs within gross margin related to tariffs and airfreight. Adjusted effective tax rate is expected to be 28% in fiscal 2019.

Capital expenditure for fiscal 2019 is now projected to be $300 million compared with $275-$285 million mentioned earlier. The increase stems from ramp up of store renovation and relocation programs, store openings, and investments in technology and other general infrastructure projects.

Looking for More Favorable Stocks? Look at These

Here's Why Investors Should Hold on to IHS Markit Stock