3M Company MMM recently announced that it has inked an agreement with an affiliate of Altaris Capital Partners, LLC to divest considerably all of its drug delivery business. The deal, worth of about $650 million, includes cash, a 17% noncontrolling interest in the new company and an interest-bearing security. The deal is subject to customary closing conditions and regulatory approvals, and is projected to close in the first half of 2020.

Some other notable inorganic activities completed by the company are the sale of its gas and flame detection business to Teledyne Technologies Inc. TDY and an agreement to sell its advanced ballistic-protection business to Avon Rubber, both in August 2019. In addition, 3M divested its communication markets business in 2018 while completed the buyout of the technology business of M*Modal in February 2019. Also, it completed the acquisition of Acelity Inc and its KCI subsidiaries in October. In this regard, acquired assets and divestments had a net positive impact of 0.6% on sales in the third quarter of 2019. 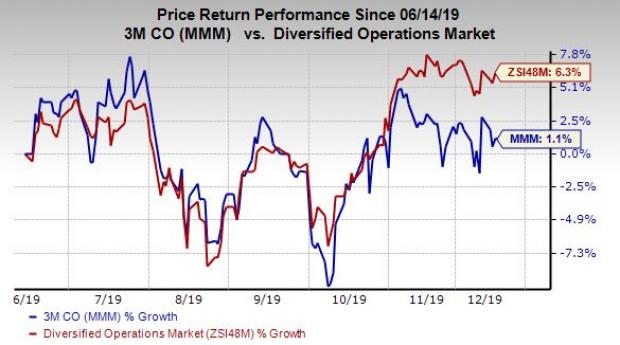 A couple of better-ranked stocks from the same space are Macquarie Infrastructure Company MIC and ITT Inc. (ITT - Free Report) , each carrying a Zacks Rank #2 (Buy). You can see the complete list of today’s Zacks #1 Rank (Strong Buy) stocks here.