Majority of work related to the deal will be executed in Andover, MA. The entire task is expected to be completed by April 2023.

A Brief Note on AEGIS and FCS MK 99

Aegis is an integrated missile guidance system used by the U.S. Navy and allied ships to shield the fleet against aircraft, cruise missiles and ballistic missiles. Simultaneously, it is also capable of launching attacks on land targets, submarines and surface ships.

The FCS MK-99 is a major component of the Aegis Combat System, which controls the loading, arming and launching of the selected weapon, and provides terminal guidance for Anti-aircraft warfare (AAW) missiles. FCS controls the continuous wave illuminating radar with a very high probability of kill. The MK-99 FCS also controls the target illumination for the terminal guidance of Ship Launched SM-2 Anti-Air Missiles.

Increasing geo-political tensions across the globe have prompted nations to strengthen their arsenal with technologically advanced missile defense systems.

Backed by the afore-mentioned developments, Raytheon’s IDS segment has been delivering impressive performances in recent times. In the third quarter of 2019, the business unit witnessed a solid top-line growth of 18% on a year-over-year basis.

In a year’s time, shares of Raytheon have gained 35% compared with the industry’s 42.5% rally. 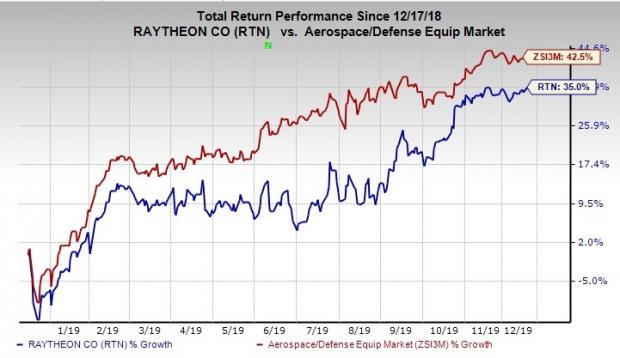 Ducommun delivered a positive earnings surprise of 14.75% in the last four quarters. The Zacks Consensus Estimate for 2019 earnings climbed 6.3% over the past 90 days.