Boeing (BA - Free Report) recently announced its decision to temporarily suspend production of its 737 Max jetliner beginning January 2020. Not only did this drastic decision dragged the aircraft giant’s shares down by 4% in the aftermarket session on Dec 16, following the news release, but also dealt a major blow to suppliers that manufacture components for the plane.

Notably, a network of almost 600 suppliers and hundreds of subcontractors manufacture components for the 737 Max, ranging from materials like metal and composites to components such as wings and fuselages. These companies are already partially bearing the brunt of the slowdown in the production of the 737 Max business line and are expected to be affected by the latest development.

Boeing’s fastest-selling 737 Max planes were grounded in March 2019, following two fatal crashes that caused loss of more than 300 lives. Consequently, new orders also dried up, thereby forcing the plane maker to reduce its production rate for this jetliner from 52 per month to 42 in April.
Adding to its woes, a constant conflict between Boeing and international air-safety authorities repeatedly delayed the return of 737 Max fleet to service. The aircraft major has been consistently struggling to gain regulators’ approval of software fixes for the planes, after a flight-control system was implicated in both crashes. Ultimately, the Federal Aviation Administration (FAA) announced in December that it would not approve the plane’s return to service before 2020.

Despite these issues, Boeing went on producing 737 Max planes although at a slow pace, with its suppliers providing the necessary components. As a result, currently, there are now approximately 400 airplanes in the company’s storage. Such sizable inventory with a few orders in hand must have forced the jet maker to focus on delivery of stored aircraft and temporarily suspend production. The fact that 737 Max is roughly 120 feet in length (depending on the model) with a 117-foot wingspan, it will be difficult and expensive to store if production continues.  Per management, factors like extension of the re-certification of 737 Max to 2020 along with the uncertainty about the timing and conditions of return to service and global training approvals, have also played a vital role in Boeing taking such a drastic step like suspension of manufacturing.

Earlier when Boeing lowered 737’s production rate, it continued to purchase components from suppliers at the original rate to maintain its supply chain and avoid any disruption once the plane returns to service. However, this time it remains unclear what the plane maker will do as far as purchasing from suppliers are concerned. Although the company has announced that its efforts will include maintenance of supply chain quality, it is still unclear how that will be achieved. And it is this uncertainty that has put suppliers in a precarious situation.

Below we have briefly mentioned a few notable suppliers of the 737 Max that are likely be affected by the production halt and thus need investors’ attention right now.

General Electric Company (GE - Free Report) , which makes all 737 Max’s engines through a joint venture with France’s Safran SA (SAFRY - Free Report) , will likely take a significant hit to its cash flow from Boeing’s decision to halt production of the 737 MAX jetliner. Notably, the production cut in April has already dented the conglomerate’s finances, with the company estimating the MAX grounding to reduce its cash flow by $1.4 billion in 2019. The latest production halt is anticipated to hit its quarterly earnings by $2 billion, per a report by the Wall Street Journal. Following the production suspension news, its shares have lost 2.1%.

Safran had earlier warned that if the aircraft's grounding lasts until the end of 2019, its cash conversion could dip below its targeted 50-55% range of recurring operating income. Now with the halt in production, the situation is likely to get worse for this company, which lost 3.9%, following the news release.

Spirit AeroSystems (SPR - Free Report) , which produces the fuselage, pylons, thrust reverser, wing leading edges and engine nacelles for 737 Max, earns almost 80% of its revenues from Boeing, per a report by Reuters. Thousands of employees at Spirit have already taken unpaid furlough days over the summer as the manufacturer cut costs because of the MAX grounding. Surely the production halt will hit this company hard. Its shares lost 4.4% following the production halt news release.

Woodward (WWD - Free Report) , which supplies the thrust reverser actuation system for 737 MAX, has been witnessing soft initial provisioning sales lately due to the plane’s grounding.  Now with the halt in production, the situation is likely to get worse for this company, which lost 3.7% following the news release. 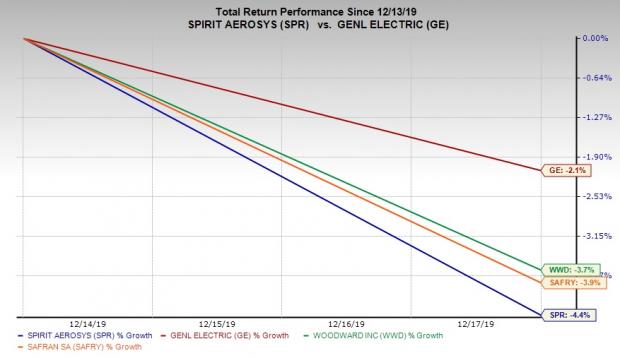