As noted by General Electric, per the deal, it will produce, supply, install and commission 30 of its state-of-the-art turbines, capable of operating in the 4.8 MW-5.1 MW range. The company will work on installing the turbines at Rio Energy’s Serra da Babilonia wind farm facility, which currently carries an installed capacity of 223.25 MW. The installment will enhance the capacity of the wind farm by an additional 150 MW. Notably, the company expects the installation of the Cypress turbines to get completed in 2020's last quarter.

In addition, General Electric will be responsible for providing 10 years of operation and maintenance services for all of its equipment delivered in the facility, with an option of extending it to 20 years. It’s worth mentioning here that the company will produce various components of the Cypress units at its facility located in Camaçari, Bahia, while the blades will be supplied by its Port of Suape-based business unit, LM Wind Power.

General Electric intends to become more competent by focusing on core businesses. In June 2018, it rolled out a business portfolio restructuring program to become a high-tech industrial company focused on Aviation, Power and Renewable Energy. Although the company is working toward improving operations in the Power segment, challenges in the segment persist.

In the past three months, the Zacks Rank #3 (Hold) company’s share price has increased 17% compared with 6.8% growth recorded by the industry. 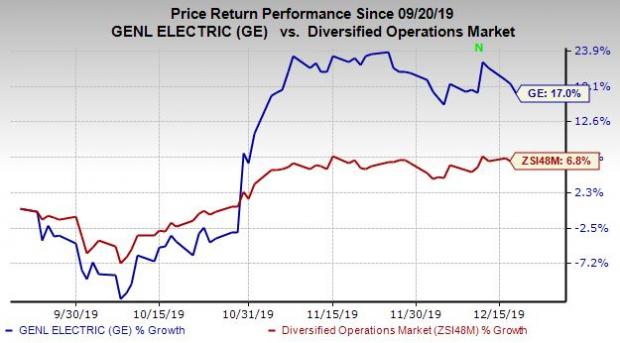 Cintas outpaced estimates in each of the preceding four quarters, the average being 8.50%.

ITT outpaced estimates in each of the preceding four quarters, the average being 7.85%.

5 Losing Stocks From 2019 to Rebound Next Year