Which Shipping Stocks Could be the Frontline (FRO) of 2020?

The shipping industry, often considered the lifeline of the global economy, transports majority of the goods involved in world trade. Given this strong relationship with the economy, it is no wonder, the U.S.-China trade tensions have exerted pressure on the industry in 2019.

Despite headwinds, Frontline Ltd. FRO benefited immensely from rising U.S. crude oil production and exports that drove tonne-miles. Crude oil demand has been healthy on the whole, with demand from China and India being especially strong. On the back of these tailwinds, the company’s revenues grew nearly 18% year over year in the first nine months of 2019. Its impressive performance is also reflected in its earnings results, so far in the year. Frontline reported better-than-expected earnings in two of the last three reported quarters.

The company’s extensive and modern fleet of less than four years further bolstered its performance in 2019. As of Sep 30, 2019, Frontline’s fleet comprised 48 owned vessels including 14 VLCCs, 16 Suezmax tankers and 18 LR2/Aframax tankers. In August, the company entered into an agreement with Trafigura to purchase 10 Suezmax tankers. The acquisition, to be completed either by December 2019 or by March 2020, is expected to provide a further boost to earnings.

Owing to these tailwinds, shares of Frontline have surged more than 100% so far this year compared with the industry’s 25.8% rise. 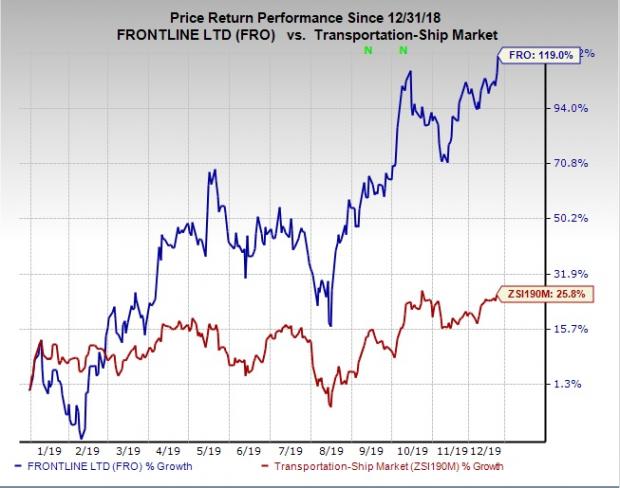 The Shipping Industry in 2020

One of the most notable changes that will take place in the shipping industry is the International Maritime Organisation (IMO) 2020 regulations. The regulations are aimed at curbing pollution caused by ships across the globe. Once the new rules become effective, shipping companies will be required to use fuels with sulfur content below 0.5% as opposed to the existing 3.5%.

The IMO regulations on the shipping industry is a double-edged sword. On one hand, fuel costs in the industry are expected to rise 25-40% following the new rules, on the other hand tanker rates are anticipated to rise significantly due to tight tonnage supply and robust demand for oil shipments. Multiple factors will lead to tight tonnage supply. When the IMO regulations will take effect in January 2020, initially a substantial number of ships would be taken out of service for scrubber installation. Moreover, older vessels, which cannot be fitted with scrubbers, may be scrapped. Slow steaming (when a vessel sails slowly to reduce fuel costs and lower sulfur emissions) would further add to the tightening of tonnage supply. With voyages taking longer than usual, lesser number of vessels will be available, consequently reducing capacity.

Favorable developments related to the U.S.-China trade war also holds promise for the industry. The two nations recently reached a phase one trade deal, which upon signing would mean reduction in U.S. tariffs on Chinese goods as well as increased purchase of U.S. farm, energy and manufactured goods by China. In the event of materialization of the trade truce, international trade is expected to flourish and in turn drive growth in the shipping industry.

Given this bullish backdrop, it would be wise to invest in some top-ranked shipping stocks that have the potential to gain immensely in 2020.

Considering the vastness of the sector, it is by no means an easy task to pick outperformers for the coming year. This is where the Zacks Rank, which justifies a company’s strong fundamentals, can come in handy.

Based on a favorable Zacks Rank #1 (Strong Buy) or 2 (Buy), we have zoomed in on four shipping stocks, which should be added to one’s portfolio for handsome returns in 2020. You can see the complete list of today’s Zacks #1 Rank stocks here.

Costamare Inc. CMRE operates as a containership owner that charters vessels to liner companies. The company is headquartered in Athens, Greece. The company flaunts a Zacks Rank #1. The Zacks Consensus Estimate for 2020 earnings has been revised 14.8% upward in the past 60 days. Additionally, the stock carries a VGM Score of B. Shares of the company have soared more than 100% so far this year.

Navios Maritime Partners LP NMM, also a Zacks #1 Ranked company, is an international owner and operator of dry cargo vessels. The company is headquartered in Piraeus, Greece. The Zacks Consensus Estimate for the company’s 2020 earnings has been revised 38.3% north in the past 60 days. The stock carries a commendable VGM score of A. Shares of the company have rallied 42.9% so far this year.

Teekay Tankers Ltd. TNK headquartered in Hamilton, Bermuda, is one of the largest operators of mid-sized tankers such as suezmax, aframax and LR2 vessels. This stock sports a Zacks Rank #1. The Zacks Consensus Estimate for its 2020 earnings has been revised upward by more than 100% in the last 60 days. Additionally, the stock carries a Momentum Score of A. Shares of the company have skyrocketed more than 200% so far this year.

Euronav NV (EURN - Free Report) is a tanker company based in Antwerp, Belgium. It is involved in the ocean transportation and storage of crude oil. This company carries a Zacks Rank #2. The Zacks Consensus Estimate for its 2020 earnings has been revised 50.5% northward in the past 60 days. Shares of the company have gained 76.6% on a year-to-date basis. 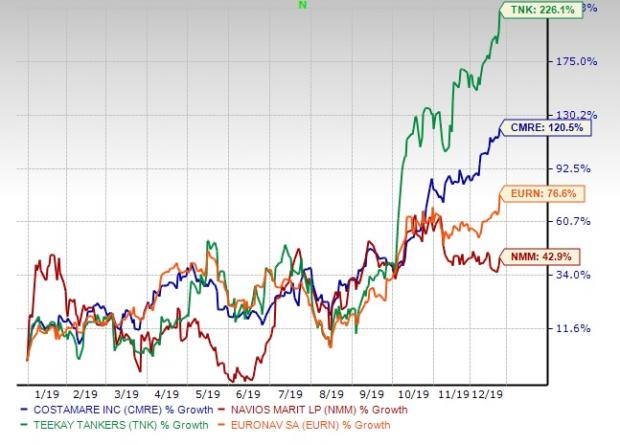