United States Steel Corporation (X - Free Report) has issued guidance for the fourth quarter and 2019 along with key financial and operational updates.

The company projects adjusted EBITDA for the fourth quarter to a loss of $25 million, excluding an expected restructuring and other charges of $225 million. The company stated that steel markets in North America are recovering. However, the Tubular and Europe businesses remain under pressure. It expects adjusted loss per share for the fourth quarter to be around $1.15. The Zacks Consensus Estimate for fourth-quarter earnings is currently pegged at a loss of 65 cents.

The company stated that flat-rolled steel market conditions are improving. However, results of the unit are expected to be affected in the fourth quarter, partly due to lower shipments and steel selling prices.

For 2019, adjusted EBITDA is forecast to be roughly $682 million. The amount excludes around $285 million of estimated restructuring and other charges as well as nearly $47 million of estimated impacts stemming from the fire at its Clairton coke making facility last December. Adjusted loss per share for 2019 is projected at a loss of around 42 cents.

U.S. Steel has also provided an update on its capital allocation strategy. The company’s board has given consent to adjust quarterly dividend to a penny per share, down from 5 cents. The change will be effective as dividends are declared in 2020. The move is expected to generate around $25 million of annual cash savings starting in 2020.

Moreover, the company has stopped stock repurchase program and it has decided to formally terminate the program. 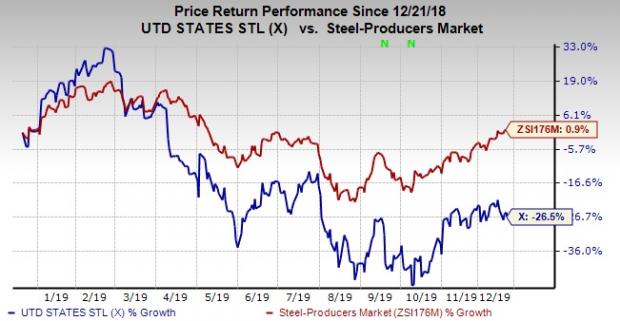 Kirkland Lake Gold has an expected earnings growth rate of 97.1% for 2019. The company’s shares have surged 67.6% in the past year.

Impala Platinum Holdings has projected earnings growth rate of 255.2% for fiscal 2020. The company’s shares have skyrocketed 324.1% in a year.

Polymetal International has an estimated earnings growth rate of 40.1% for the current year. Its shares have returned 39.5% in the past year.