Shares of Ingersoll-Rand plc (IR - Free Report) have rallied 46.4% so far this year. The company has outperformed its industry’s growth of 34.5% over the same time frame. 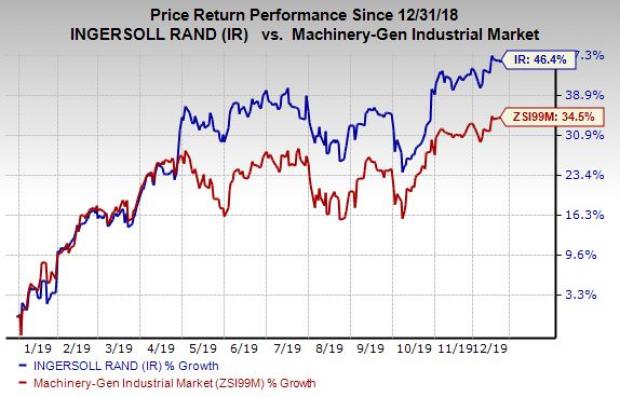 This Zacks Rank #3 (Hold) stock, with a market cap of $32 billion, has impressed investors with its recent earnings streak. It surpassed estimates in the trailing four quarters, the average positive surprise being 5.48%.

Let’s analyze the reasons behind the company’s impressive price performance and find out if there is room for further appreciation.

Ingersoll-Rand has been strengthening its businesses on acquisitions and unique business strategies. Notably, the company spent about $1.5 billion on acquisitions in the first nine months of 2019. It acquired Precision Flow Systems in May 2019. The buyout has been supporting Ingersoll-Rand’s existing fluid management business, and has boosted margins and profitability. For 2019, the company expects the Precision Flow Systems buyout to boost sales by 1.5%.

Also, Ingersoll-Rand is witnessing strength in its non-residential HVAC (heating, ventilation, and air conditioning) markets — particularly in North America and Europe. In addition, business in the residential HVAC market is predicted to grow in low to mid-single digits in 2019. For 2019, the company anticipates revenue growth of 5.5-6.5%. Organic sales growth projection is maintained at 5-6%.

The Zacks Consensus Estimate for 2019 earnings for Ingersoll-Rand has climbed nearly 0.5% over the past 60 days from $6.37 to $6.40. For the year, five estimates have been being revised upward in the past couple of months against none downward. Also, over the same time frame, the consensus estimate for 2020 has remained stable at $6.92.

Ingersoll-Rand reported adjusted earnings per share of $1.99 in third-quarter 2019, marking a 13.7% year-over-year improvement. Moreover, the figure beat the Zacks Consensus Estimate by 4.19%. This earnings improvement is primarily attributable to solid revenue growth, margin expansion and lower share count. The company expects gaining from strengthening HVAC markets, and effective operating system and execution capabilities.  It anticipates adjusted earnings per share of roughly $6.40 for 2019.

However, escalating costs are a major headwind for Ingersoll-Rand. Notably, in the third quarter, the company’s cost of sales grew 8% year over year, and selling and administrative expenses rose 8.2%.

Kaman pulled off average positive surprise of 7.72% in the last four quarters.

Barnes Group pulled off average positive surprise of 4.21% in the last four quarters.

DXP Enterprises pulled off average positive surprise of 17.67% in the last four quarters.