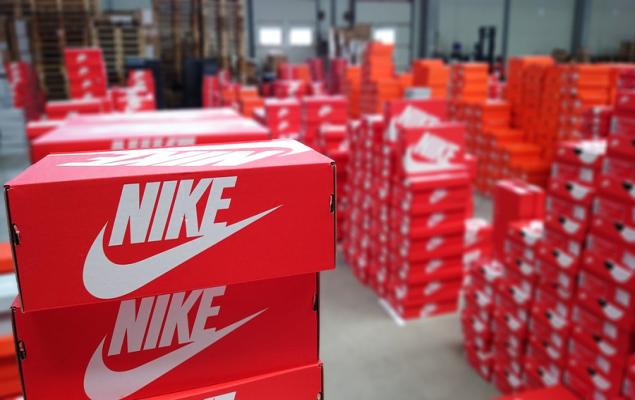 Shares of NIKE dipped 2.1% in the after-hours trading session on Dec 19 due to increased concerns on tariffs despite strong quarter. In the past month, this Zacks Rank #2 (Buy) stock has gained 9.3% compared with the industry’s 8.7% growth. 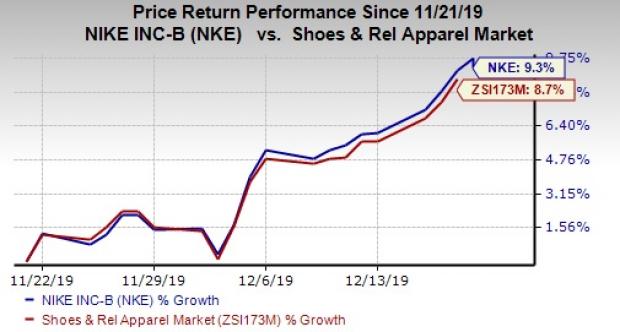 Revenues of the Swoosh brand owner increased 10% to $10,326 million and surpassed the Zacks Consensus Estimate of $10,101 million. This outperformance was primarily driven by the solid execution of the Consumer Direct Offense strategy globally, which fueled balanced growth across all geographies led by strength in Greater China and digital. On a currency-neutral basis, revenues grew 13%, driven by growth across all geographies.

Revenues for the NIKE Brand increased 10% to $9,844 million, while constant-dollar revenues for the brand were up 12%. Results gained from continued growth in NIKE Direct and its wholesale business. Moreover, strength in major categories like sportswear, the Jordan brand and Running as well as improvements in footwear and apparel fueled top-line growth.

Within the NIKE Brand, revenues in North America improved 5% on reported and currency-neutral basis, owing to continued growth in NIKE digital, partly driven by solid Black Friday sale. The company is gaining from efforts to transform the North America marketplace, with growth in NIKE Direct and across key differentiated wholesale partners.

In EMEA, the company’s revenues increased 10% (up 14% on a currency-neutral basis), backed by double-digit growth in most key categories, including Sportswear and Jordan. Further, NIKE digital grew 27% in EMEA. Per the company, the NIKE Brand’s growing popularity in all key cities across EMEA also drove growth in the region. Notably, EMEA includes five of NIKE’s 12 key cities.

In APLA, NIKE witnessed a 13% revenue decline (up 18% on a currency-neutral basis). Currency-neutral growth in the region was fueled by strength in Korea and Japan as well as a 67% increase in NIKE digital. The company is expanding its digital business in the region by partnering with digital platforms such as ZOZOTOWN and Flipkart.

Revenues at the Converse brand rose 13% to $480 million. On a currency-neutral basis, revenues of the segment were up 15%, owing to double-digit growth in Asia and Europe as well as strength in the global digital business.

Gross profit rose 11% to $4,544 million, while gross margin expanded 20 basis points (bps) to 44%. The expansion was mainly driven by an increase in average selling prices, and margin expansion in NIKE Direct and Converse, partly negated by tariffs implemented in September in North America, adverse currency rates and supply-chain investments.

Selling and administrative expenses increased 6% to $3,324 million. As a percentage of sales, SG&A expenses leveraged 130 bps to 32.2%. SG&A gains resulted from productivity gains under operating overheads, efficiencies in demand-creation spending and the company’s decision to postpone some demand-creation expenses to the second half for events like the Air Max Day, the NBA All-Star Weekend, European Championships and the Tokyo Olympics. However, investment in digital capabilities partly offset aforementioned gains.

Notably, demand-creation expenses declined 3% year over year to $881 million due to the shift in timing of certain investment campaigns as stated above. Operating overheads were up 9% to $2,443 million, reflecting continued investments in transformational initiatives, particularly in NIKE Direct and global operations.

Despite the volatile macroeconomic and geopolitical environment, NIKE expects to continue investing in key capabilities to aid digital transformation, and deliver robust growth in fiscal 2020 and beyond. Consequently, the company retained most of its initial guidance for fiscal 2020. It continues to expect high-single-digit revenue growth on a reported basis, suggesting slight growth from the increase reported in fiscal 2019. It expects foreign currency to hurt reported revenue growth by 2-3 points in the fiscal year. On a currency-neutral basis, the company now expects revenues to be low-double digits.

Gross margin for the fiscal year is expected to expand 50-70 bps. The company expects SG&A expenses to increase in high-single digits in fiscal 2020, including a slight impact from the recent Celect buyout. Other income, net of interest expenses, is now anticipated to be $100-$150 million. Effective tax rate is now expected to be in the low to mid-teens range.

For third-quarter fiscal 2020, the company expects revenue growth on a reported basis to be in high-single digits, even though at the very low-end of the range. On a currency-neutral basis, it expects strong revenues despite a negative impact of 2 points from foreign currency translations.

Gross margin for the fiscal third quarter is estimated to be flat year over year, reflecting strong underlying product margin expansion on robust product pipeline, offset by tariffs in North America and investments in supply chain.

Further, the company expects SG&A expenses to increase in the low-double-digit to low-teens range, backed by its decision to shift demand creation to the second half of fiscal 2020 to strengthen the focus on NBA All-Star Weekend, European Championships, Tokyo Olympics and launch of innovative products. Other income, net of interest expenses, is expected to be $50-$75 million. Effective tax rate is expected to be in the low to mid-teens range.

Other Favorable Stocks to Consider