The Mosaic Company MOS announced plans to reduce the production of fertilizer until markets improve. In addition to the 500,000 ton-reduction that the company implemented in the second half of 2019 mainly in Louisiana, it plans to curtail the production of phosphate by 150,000 tons per month at its Central Florida facilities.

Mosaic will continue to operate at lower rates in its Canada potash business. Both phosphate and potash production is anticipated to return to full rates when required to meet the requirements of customers.

Mosaic will not produce at high rates if it is not able to realize reasonable prices. Moving into 2020, the company expects extended production curtailments to help balance the global supply-and-demand picture.

With fertilizer-depleted soils and rising prices of agricultural commodities, it anticipates strong business conditions and healthy demand to continue in the coming year.

For the fourth quarter of 2019, Mosaic anticipates phosphate and potash shipment volumes to be modestly below the levels mentioned recently. Further, gross margin per ton for the Phosphates segment is anticipated to be considerably below the previously stated range due to low volumes and realized prices.

Shares of Mosaic have lost 29.4% year to date compared with the industry’s 4.3% decline. 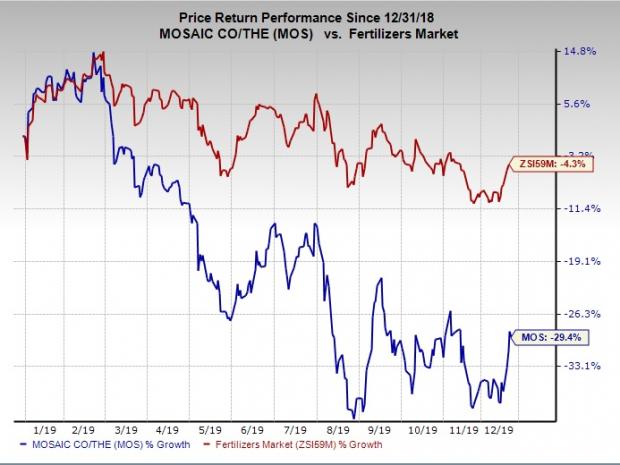 General Moly has an expected earnings growth rate of 12.5% for the current fiscal year. The company’s shares have gained 20.5% in the past year.

Sandstorm Gold has an estimated earnings growth rate of 166.7% for the current year. Its shares have moved up 51.3% in the past year.