Apogee Enterprises, Inc. APOG delivered third-quarter fiscal 2020 (ended Nov 30, 2019) adjusted earnings per share of 57 cents, which missed the Zacks Consensus Estimate of 76 cents by a margin of 25%. The reported figure also declined 27% from the prior-year quarter.

Revenues in the Architectural Glass Systems segment slipped 9% year over year to $89.4 million. Operating income came in at $4 million, reflecting year-over-year decline of 30%.

The Architectural Services segment’s backlog went up 21% to a record $607 million in the reported quarter from the last quarter’s $502 million. Backlog in the Architectural Framing segment amounted to $378 million compared with the prior-year quarter’s $388 million.

So far in fiscal 2020, Apogee has returned $33.8 million of cash to shareholders through share repurchases and dividend payments.

Shares of Apogee have gained around 18.6% in the past year as against the industry’s decline of 17.6%. 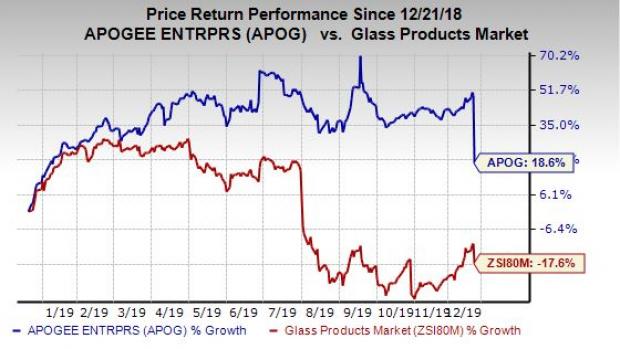 Northwest Pipe has an expected earnings growth rate of 15.8% for the current year. The stock has appreciated 43.8% over the past year.

Reliance Steel & Aluminum has an estimated earnings growth rate of 7.4% for the ongoing year. In a year’s time, the company’s shares have gained 60.8%.