U.S. defense stocks have performed incredibly well so far in 2019, courtesy of a number of growth catalysts, both domestic and foreign. While increased global tensions bolstered demand for military equipment worldwide, thereby aiding the largest weapons supplying nation’s boom, its own cross border tiff with North Korea and Iran boosted growth of the defense space. 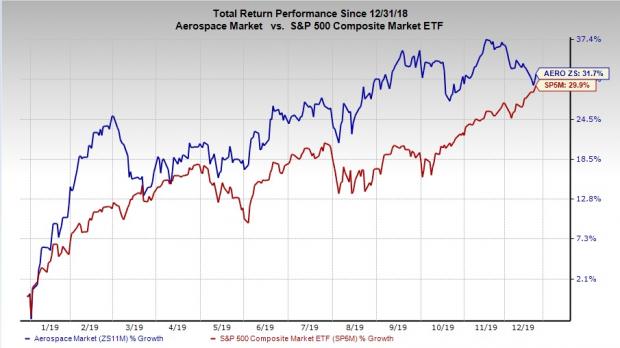 Let us now discuss in brief the growth catalysts that are expected to keep U.S. defense stocks’ winning streak alive in 2020.

Trump’s budget for fiscal 2020 includes defense spending provision of $750 billion, reflecting a solid 5% increase from the nation’s existing defense budget. In July, the U.S. House of Representatives had passed a $733 billion defense policy bill, $17 billion short of the proposed Republican-led Senate bill that involved building a wall on the border with Mexico.

The bill emphasized on increasing the end strength of the U.S. Army, Navy and Air Force to 33,600, 29.7% increase over fiscal 2019 budget. Moreover, the budget provisioned $165 billion for Overseas Contingency Operations (OCO) (as reported by CNN). This marked a striking increase from the 2019 budget, which sought $69 billion for that account.

It is this significantly increased budgetary provision that has resulted in a handful of notable contract wins for the U.S. defense biggies over the past few quarters. We expect the same trend to continue next year.

Year 2019 witnessed mega consolidations in the U.S. aerospace-defense industry, with defense giants Raytheon and United Technologies announcing a merger of equals in June to create an aerospace and defense powerhouse with an estimated value of $166 billion. Another notable merger deal was completed with Harris Corporation and L3 Technologies joining forces to form L3 Harris Technologies (LHX - Free Report) in July for $33.5 billion.

While such mergers are capable of improving economies of scale for the entire industry as a whole, these consolidations tend to expand and strengthen the product portfolio of the newly formed companies, thereby enhancing the chance of winning more contracts in the future.

Such mergers should further strengthen the U.S. defense space, attracting more contracts from across the world.

As of Dec 4, companies in the Zacks Aerospace sector are expected to record annual earnings growth of 15.6% on sales growth of 11.3% in the first quarter of 2020 per our Earnings Outlook. Meanwhile, the Zacks Consensus Estimate for the sector’s bottom line in 2020 has improved since Oct 31.

Such encouraging estimates boost the growth prospects of defense stocks in 2020.

Considering the aforementioned factors, we remain confident about the defense stocks’ rally in 2020. In this context, we have selected four large-cap defense stocks that are expected to come up with stellar performances next year. These four stocks carry a Zacks Rank #1 (Strong Buy) or 2 (Buy). You can see the complete list of today’s Zacks #1 Rank stocks here.

Impressively, these stocks have also outperformed the broader market year to date, making them even more lucrative choices.

Teledyne Technologies (TDY - Free Report) is an industrial conglomerate that serves the aerospace and defense market and a few more. The company, carrying a Zacks Rank #2, has an expected earnings growth rate of 9.2% for the next year. Over the past 60 days, the company has seen the Zacks Consensus Estimate for 2020 move up 3.2%. Its shares have gained 65.3% year to date, thereby outperforming S&P 500’s 29.9% gain.

HEICO Corp. (HEI - Free Report) is one of the world’s leading manufacturers of Federal Aviation Administration-approved jet engine and aircraft component replacement parts. It has an expected earnings growth rate of 15.2% for the next fiscal year. The Zacks Consensus Estimate for fiscal 2020 earnings has improved 3.9% over the past 60 days. This Zacks Rank #1 company’s shares have returned 50.9% year to date.

L3Harris is a technology-oriented aerospace and defense player that delivers advanced defense and commercial technologies. It has an expected earnings growth rate of 10.4% for the next fiscal year. The Zacks Consensus Estimate for 2020 earnings has improved 2.2% over the past 60 days. This Zacks Rank #2 company’s shares have returned 50.8% year to date.

Leidos Holdings (LDOS - Free Report) is a global science and technology leader that serves the defense, intelligence, civil and health markets. It has an expected earnings growth rate of 8.7% for the next fiscal year. The Zacks Consensus Estimate for 2020 earnings has improved 3.8% over the past 60 days. This Zacks Rank #2 company’s shares have returned 89.1% year to date. 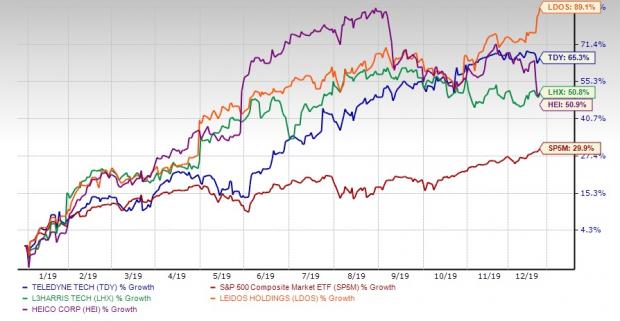