Shares of WestRock Company WRK scaled a fresh 52-week high of $43.29 during trading session on Dec 23, before retracting a bit to close at $43.18. Continued investment in projects and the KapStone acquisition have contributed to this rally.

WestRock, a Zacks Rank #3 (Hold) stock, has a market cap of roughly $10.9 billion. The company has an expected long-term earnings per share growth rate of 4.3%. It surpassed the Zacks Consensus Estimate over the trailing four quarters, the average positive beat being 10.51%.

Shares of WestRock have gained 14.3% so far this year, as against the industry’s decline of 0.8%. 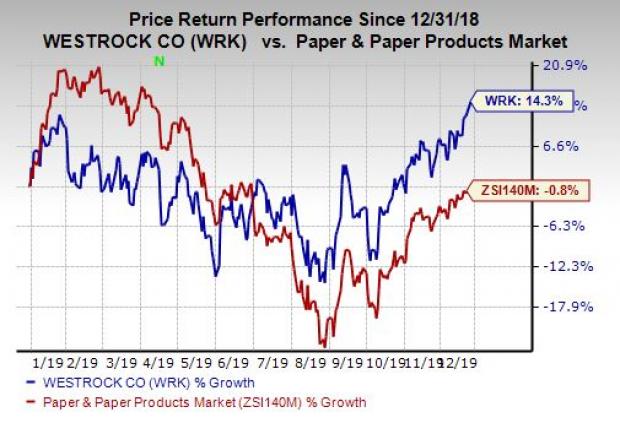 The company plans to invest approximately $1 billion in business till fiscal 2021. This is anticipated to generate $240 million in annualized EBITDA. In fiscal 2019, the company completed strategic capital projects at its Porto Feliz corrugated box plant in Sao Paulo, Brazil, Cottonton, AL and Covington, VA mills.

During fiscal 2018 and 2019, the company completed acquisitions of Schlüter, Plymouth Packaging and rival KapStone Paper and Packaging Corp that expanded its product offerings and geographic presence. The integration of KapStone Paper, the most notable acquisition among these, is on track. The company anticipates cost synergies and performance improvements of more than $200 million by the end of fiscal 2021.

WestRock is focused on productivity and performance-improvement programs across its manufacturing footprint, which, in turn, will expand margins. Also, the company announced that it is reconfiguring its North Charleston, SC, paper mill to boost the long-term competitiveness of the mill. The move is expected to increase the company’s annual EBITDA by approximately $40 million, primarily owing to the reduction in operating costs from the shutdown of the paper machine and associated infrastructure.

General Moly has an expected earnings growth rate of 12.5% for the current fiscal year. The company’s shares have gained 7.2% in the past year.

Sandstorm Gold has an estimated earnings growth rate of 166.7% for the ongoing year. Its shares have appreciated 45.9% over the past year.

5 High-Yield Dividend Stocks Up More Than 30% This Year