In the past week, Delta Air Lines (DAL - Free Report) announced that it will be part of Airlines for America (A4A), the trade organization for leading U.S. passenger and cargo airlines, again next year. Notably, this Atlanta, GA- based had walked out of the organization in 2015 due to policy disagreements.

United Airlines (UAL - Free Report) also made headlines, courtesy of its decision to extend the grounding period of Boeing 737 Max jets in its fleet. Currently, this Chicago-based carrier has 14 such jets in its fleet. American Airlines (AAL - Free Report) also grabbed the limelight by virtue of its decision to start operating flights to Morocco next year. The flights, once operational, will mark the carrier’s entry into the African continent. An expansion-related update was also available from Spirit Airlines (SAVE - Free Report) in the week.

1. A4A, which includes the likes Southwest Airlines (LUV - Free Report) , United Airlines and American Airlines, welcomed the decision of Delta to rejoin the group. In fact, Nicholas E. Calio, A4A’s President and CEO, stated that “We are a stronger association with Delta as a member”. (Read more: Delta Buries the Hatchet With A4A, Set to Rejoin Next Year).

2. United Airlines joined fellow U.S. carriers — Southwest Airlines and American Airlines — in extending the period of Boeing 737 MAX jets. United Airlines announced that 737 MAX operations will remain suspended through Jun 4, 2020, as opposed to the earlier-estimated date of Mar 4. With the Boeing 737 MAX jets in its fleet being non-operational, the carrier expects to cancel approximately 56 flights a day next January and February. As air-travel demand usually picks up in the subsequent months, flight cancellations at United Airlines are expected to rise to 80 in March, April, and 108 in May and early June.

Moreover, Spirit Airlines inked a deal with Airbus to buy 100 new Airbus A320neo Family jets, in a bid to modernize its fleet. Furthermore, the airline has the option to purchase up to 50 more planes under the deal, which includes Airbus A319, A320, and A321 models. Spirit intends to take delivery of these fuel-efficient jets through 2027. 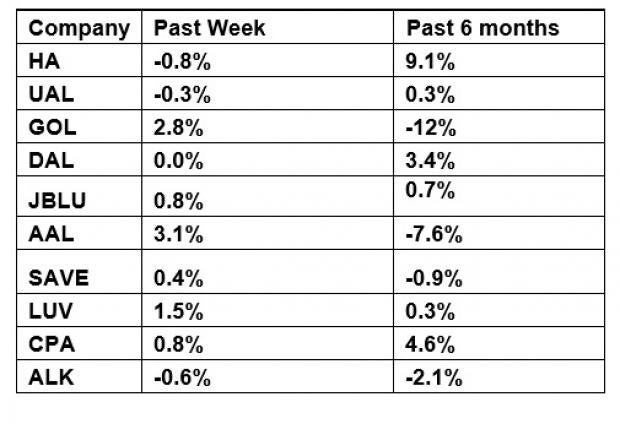 The table above shows that majority of the airline stocks traded in the green in the past week, though the gains were muted in nature. Consequently, the NYSE ARCA Airline Index rallied merely 0.4% to $112.55 during this period. American Airlines shares gained the most in the period. Over the course of six months, the index has appreciated 1.4%, with shares of Hawaiian Holdings (HA - Free Report) gaining the most.

Stay tuned for usual updates in this space.