Canadian Solar Inc. (CSIQ - Free Report) recently announced that it has completed its first solar project in Taiwan, named Hualien Rongkai, which has a generation capacity of 1.98 megawatt peak (MWp). The project started its commercial operations from Dec 13 and is expected to generate approximately 2,505 megawatt hour (MWh) of solar electricity per year. Notably, the project is powered by 6,384 pieces of Canadian Solar modules.

The clean energy generated from this solar farm will be purchased by TaiPower Inc., under a 20-year feed-in-tariff contract, at the rate of 16 cents per kilowatt-hour (kWh).

Per a report released in September by pv magazine, the Taiwan government expects the nation’s new solar generation capacity to reach around 3.7 gigawatts (GW), before 2021. The government is also taking initiatives to increase its solar energy contribution to the nation’s generating capacity to 6.5 GW by 2020. Such projections reflect the rapidly expanding growth opportunities offered by the Taiwan solar market for prominent solar players like Canadian Solar.

The company caters to a geographically-diverse customer base spread across key markets in the United States, China, Japan, the U.K. and Canada as well as emerging markets in Brazil, India, Mexico, Italy, Germany, South Africa and the Middle East. The company is a leading manufacturer of solar photovoltaic modules and a provider of solar energy solutions. Over the past 18 years, Canadian Solar has successfully delivered more than 38 GW of premium quality modules in more than 150 countries globally.

Per International Renewable Energy Agency’s (IRENA) GLOBAL ENERGY TRANSFORMATION report, global electricity generation from solar energy is expected to increase to nearly 360 GW per year by 2050 from the current level of 109 GW.

Alongside Canadian Solar, other solar companies like SolarEdge Technologies SEDG, SunPower Corp. SPWR and JinkoSolar JKS are expected to reap the benefits of this growing solar market.

Canadian Solar’s shares have soared 39.5% in a month compared with the industry’s growth of 13.5%. 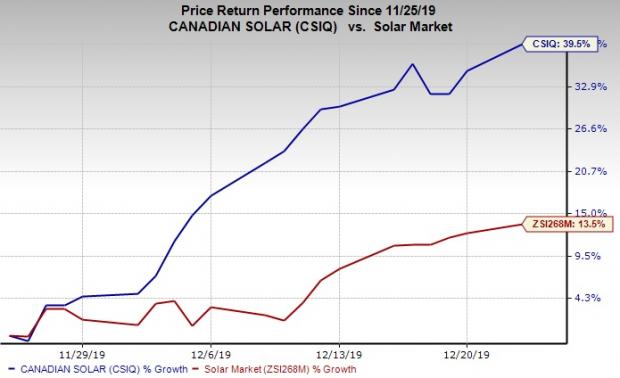