Boyd Gaming Corporation BYD has been benefiting from sports betting expansion, acquisitions and other strategic efforts. These efforts have helped the company to report robust sales and earnings growth, along with solid EBITDAR and margins. Notably, shares of Boyd Gaming have gained 46.1% so far this year compared with the Zacks Gaming industry’s 28.8% rally. 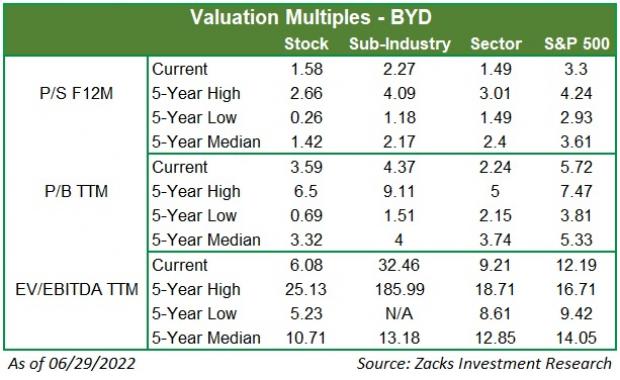 Boyd Gaming’s efforts to expand online betting offerings are encouraging. During the third quarter, it partnered with FanDuel Group for the opening of sports books at Blue Chip, Belterra Resort, Diamond Jo Dubuque and Diamond Jo Worth properties in the Midwest. It also introduced a market-leading mobile betting app in Pennsylvania. Followed by robust performance in Pennsylvania and New Jersey, FanDuel launched its mobile betting app in the state of Indiana as well.

In July 2018, it had entered into a partnership with MGM Resorts International. Per the deal, the companies can offer online and mobile gaming platforms, including sports betting, casino gaming and poker in jurisdictions wherein they have physical casino resorts and online licenses. In 2018, Boyd Gaming had also opened sports books at its two Mississippi properties: IP Casino Resort Spa in Biloxi, and Sam’s Town Hotel & Gambling Hall in Tunica.

Impressively, Boyd Gaming has been generating EBITDA growth for quite some time now. The company reported EBITDAR growth in 18 out of the last 19 quarters. During the last reported quarter, its Las Vegas segment recorded the highest third-quarter adjusted EBITDAR since 2005, backed by The Orleans and Aliante. Markedly, it has been reporting robust operating margin growth over the past several quarters. For 2019, Boyd Gaming continues to expect total adjusted EBITDA within $885-$910 million.

Melco Resorts & Entertainment surpassed estimates in three of the trailing four quarters, with the average positive surprise being 12.5%.