Tiffany & Co. came out with preliminary sales data for the interim time period extending over Nov 1 to Dec 24, also known as the “2019 interim holiday period.” In the said time frame, the jewelry retailer’s worldwide net sales rose about 1-3%, courtesy of enhanced global trends. Strength in Chinese Mainland was a major driver, countered by persistent softness in Hong Kong and hurdles in Japan.

Management is impressed with the sales growth in the Americas, after witnessing softness for quite some time. Also, Chinese Mainland sturdy, recording solid double-digit growth. However, these upsides were somewhat marred by continued weakness in Hong Kong, along with some in Japan stemming from the recent rise in consumption tax.

Without a doubt, Tiffany’s efforts to enhance store operations are yielding results. To this end, the company undertook several initiatives during the interim holiday period. It concluded the expansion of its flagship store in Shanghai, which is now the company’s largest Asian store. Further, the company renovated its flagship store in London and inaugurated its third store in Kyoto, Japan. Most recently, Tiffany introduced a store in the United States, which is its fifth outlet in New York City.

Clearly, such efforts, along with consumers’ encouraging response to Tiffany’s iconic flagship store in New York, helped the company drive sales. Also, a conducive economic environment, marked by a strong labor market and favorable consumer spending, seems to have worked well for the company this holiday season.

This marks an improvement from the 2018 holiday season (spreading over the two months ended Dec 31, 2018), wherein this Zacks Rank #4 (Sell) company’s worldwide net sales slipped 1% to $1.04 billion and comps dropped 2%. Results were significantly impacted by reduced sales to foreign tourists and lower demand from local customers in Europe and the Americas.

Tiffany, which shares space with Signet SIG, is currently benefiting from efforts to strengthen its network of stores either through opening flagship stores in key areas or upgrading the existing ones. These factors, along with favorable year-over-year comparisons, launch of new products and related marketing campaigns, are expected to aid the company’s performance in the second half of fiscal 2019. 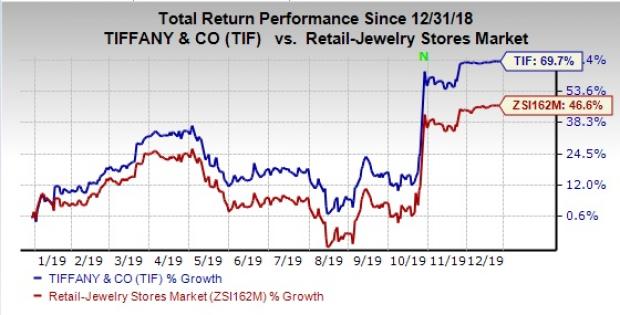 These positives are likely to drive the stock, which has been gaining momentum since its buyout offer from LVMH Moet Hennessy Louis Vuitton SE or LVMH. Markedly, shares of Tiffany have soared 69.7% so far this year, outperforming the industry’s growth of 46.6%.

Target TGT has a long-term earnings growth rate of 7.5% and a Zacks Rank #1 (Strong Buy). You can see the complete list of today’s Zacks #1 Rank stocks here.

Space Tourism Set to Become a Craze in 2020: Stocks in Focus